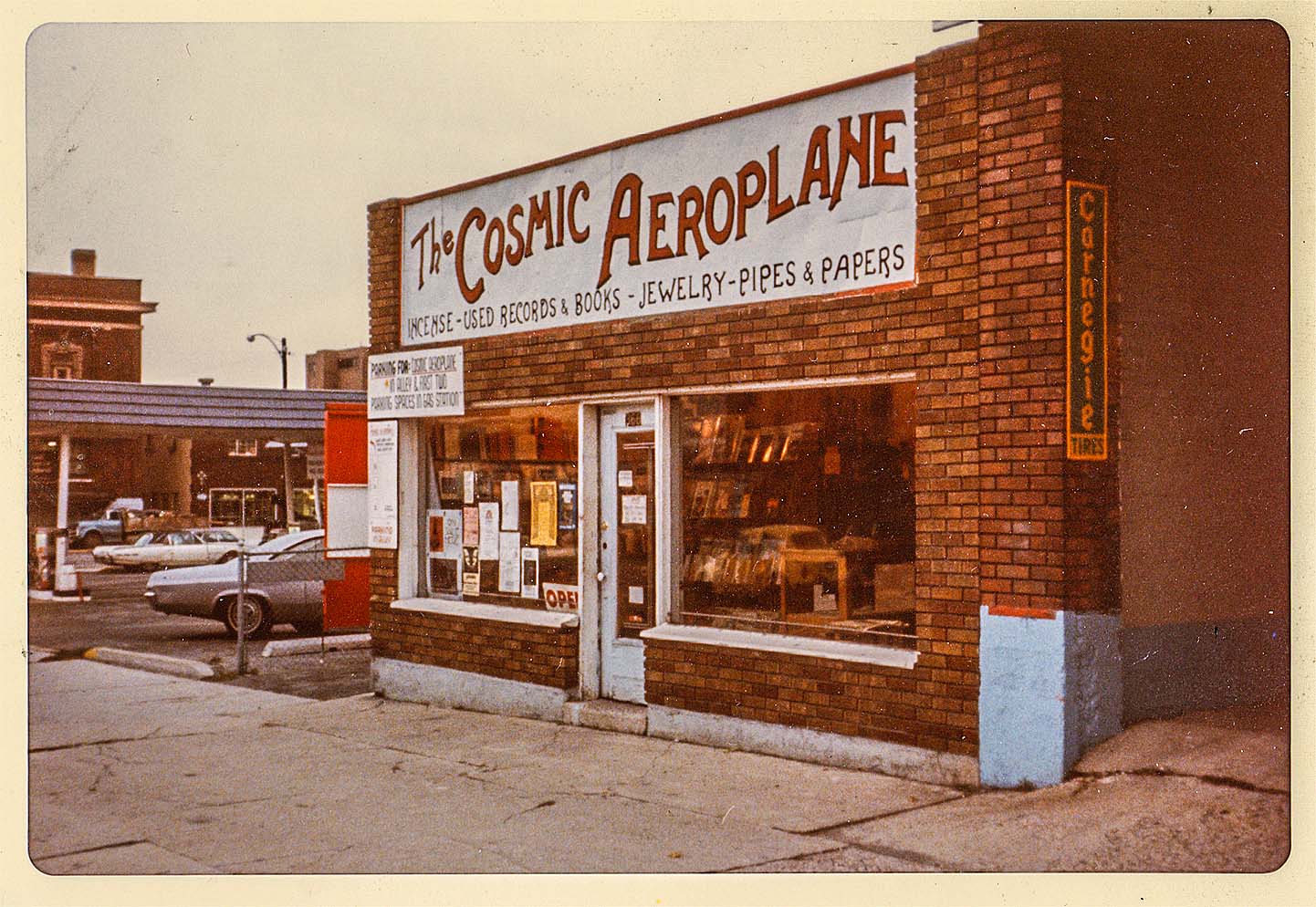 Whatever happened to
Cosmic Aeroplane?

Editor’s note:
In this series, The Salt Lake Tribune explores the once-favorite places of Utahns, from restaurants to recreation to retail.

One pill makes you larger, and one pill makes you small
And the ones that mother gives you, don’t do anything at all
Go ask Alice, when she’s 10 feet tall.
“White Rabbit,” Jefferson Airplane, 1967.

The embryonic hippie counterculture within the straight-laced confines of 1967 Salt Lake City was embodied by Cosmic Aeroplane, a little shop that embraced the coming age of mind expansion.

It sold stuff that you couldn’t find at Deseret Book or even Sam Weller’s Zion Bookstore. With alternative literature, posters and music, it grew into the youth movement’s unofficial Utah headquarters through the 1970s and even into the ’80s.

Describing the period and its convulsions to millennials is practically impossible — no computers, cellphones or apps. And no music downloads — people bought entire albums on pizza-size vinyl discs. Social media was a bulletin board littered with thumbtacked messages and fliers.

It was a vibrant and wild time, the era of long hair, the Vietnam War, the civil rights movement and the Nixon White House — and Cosmic Aeroplane, like the country, morphed over those tumultuous years. 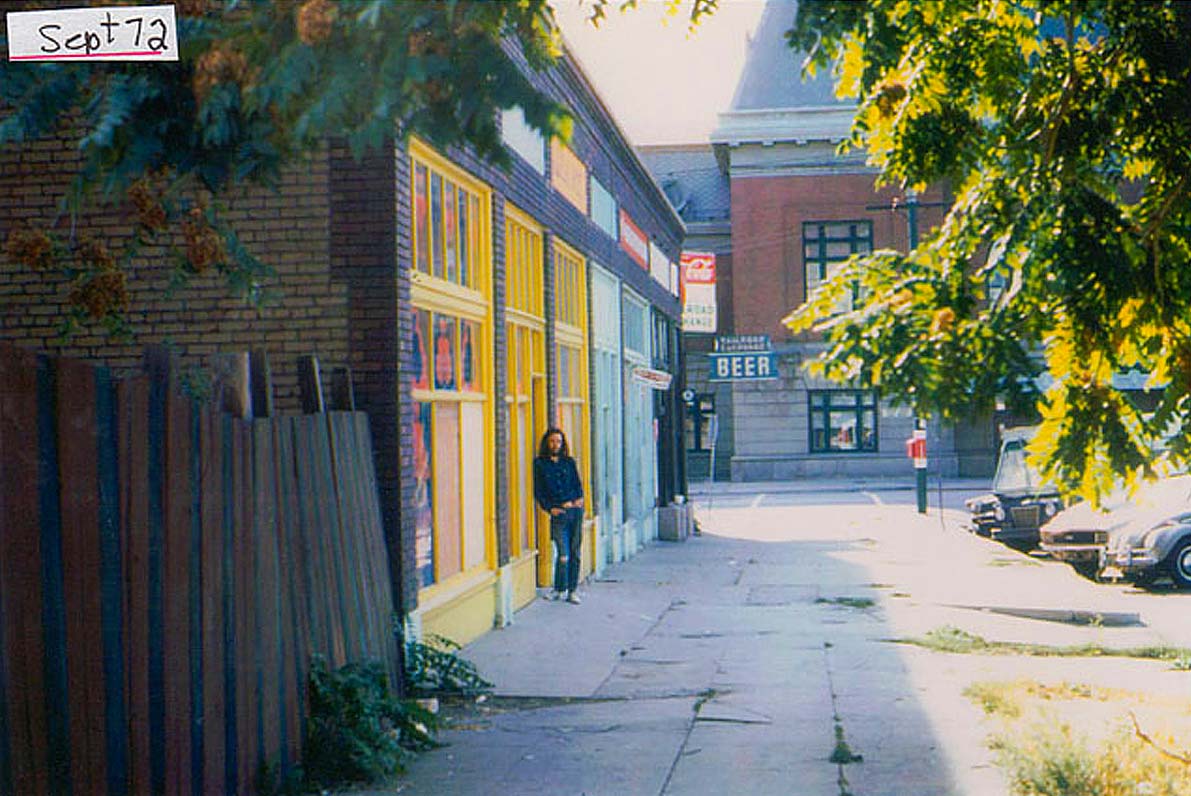 Photo courtesy Mike Evans
Cosmic Aeroplane owner Steve Jones outside the store at 369 W. South Temple, where it was located from 1969-1974.

The shop blossomed from a small interest that sold edgy books and hard-to-get comics and posters to a full-blown enterprise noted for its jewelry, records and head shop [read: drug paraphernalia peddler], as well as its broad inventory of books, including tomes on transcendental meditation, New Age healing and metaphysics. And, of course, lots of philosophy, including books such as “Zen and the Art of Motorcycle Maintenance.”

Ex-New Yorker Steve Jones hatched Cosmic Aeroplane in Utah’s capital at the very time the “Summer of Love” was unfolding in San Francisco. Jones’ endeavor tapped into the youth movement that sought to tear away from societal norms with the aid of music, drugs and fashion. Some followers called for “free love,” while others claimed the mantra “sex, drugs and rock ’n’ roll.”

The counterculture was set against a national landscape dominated by marches and protests, assassinations, and the drumbeat of young Americans coming home in body bags.

The movement was quieter in Utah, but the people nurturing its spirit at Cosmic Aeroplane were thoughtful and creative, recalled Mike Evans, who bumped into the place in his youth at its original location, 871 E. 900 South.

“It was more than what I was expecting,” he said recently. “There were left-wing publications, like Ramparts, and the East Village Other was only 75 cents.”

Photo courtesy Mike Evans This wall at the 369 W. South Temple location of Cosmic Aeroplane was painted by artist Richard Taylor, who went on to do light shows for rock groups like the Grateful Dead and Led Zeppelin. Taylor was also the visual effects supervisor for the 1980s movie Tron.

Photo courtesy Mike Evans Steve Jones is seen behind the counter at the 366 S. West Temple location. The store was here from 1974-1976.

Photo courtesy Mike Evans Steve Jones is seen with his “public piano” at the 366 S. West Temple Cosmic Aeroplane location. The store was at this site from 1974-1976.

Just as important were the used records to be scooped up for a song. Jones wore long hair and a beard and usually was clad in denim. He was quiet and soft-spoken, Evans said. “Steve Jones was well-read and was up on a lot of different topics.”

His partner at that time, Sherm Clow, was an exuberant force who balanced the subdued Jones. Clow also was known as the Rev. Willis of the Universal Life Church. Evans remembered the reverend marrying a lot of couples — usually to the beat of the era’s new anthems, ranging from dreamy to rebellious.

Clow also was fond of writing funny titles on the spines of used books that had lost their covers, Evans noted. It added a bit of ridiculous uncertainty, and Jones couldn’t stop his partner’s shenanigans.

Many young people gravitated to the place for its wares and to hang out and catch the vibe. It was both heavy and lighthearted.

The first thing you saw as you entered was a sign, Evans said. “We do not know how to get drugs of any kind,” it read. “If you don’t understand this, read it again.”

For Ken Sanders — who has long since become the proprietor of Ken Sanders Rare Books — Cosmic Aeroplane holds a special place in Salt Lake City history.

In 1969, Sanders recalled, Jones moved the shop to 369 W. South Temple, near the Union Pacific Depot in what was then a sketchy neighborhood. The building was big, and the rent was not.

Jones let Sanders set up his own comic-book and magazine rack. The cavernous space could accommodate a lot of activities, including counseling for young men who wanted to dodge the military draft. It was even big enough to allow performances by the Human Ensemble Theater, an experimental dancing and acting troupe.

“It was this catalyst of everything counterculture in Salt Lake City,” Sanders said. “We carried all the radical literature, really counterculture stuff you couldn’t get anywhere else.”

Although Cosmic Aeroplane was drawing more customers, Sanders remembered, it operated on a shoestring.

“Steve was chronically broke in those days,” he said. “He’d borrow 50 bucks to get merchandise from Greyhound that was shipped in from the coast c.o.d.,” or cash on delivery.

In 1974, Jones again moved the shop, this time to 366 S. West Temple, where Cosmic Aeroplane became a bit more visible and financially viable. A few months later, in 1975, Jones took Sanders in as a partner, along with Bruce Roberts, who had a reputation as a champion for civil rights.

But it wasn’t until 1976, when the enterprise landed at 258 E. 100 South, that Cosmic Aeroplane took its place as Utah’s thriving center of the counterculture wave that was about to crest.

Robert G. “Bones” Green said he recalls the aroma of patchouli oil and incense like it was yesterday, recalling how he strolled into the shop looking for his fix of “Wonder Wart-Hog” comic books, known for their swipes at power brokers.

“In Salt Lake, there weren’t many places where you could gather with that kind of crowd,” Green said. “It was a little bit like San Francisco, but laid back.”

The counterculture was built upon the events of the 1960s. According to Sanders, that decade was bookended like this: It began between the Nov. 22, 1963, assassination of President John F. Kennedy and the Feb. 9, 1964, appearance of the Beatles on “The Ed Sullivan Show.” It ended between the Aug. 9, 1974, resignation of President Richard M. Nixon and the fall of Saigon (in what was South Vietnam) on April 30, 1975.

Cosmic Aeroplane just kept on truckin’. On 100 South, everything came together.

“All of a sudden, we signed this lease, like we were grown-ups,” Sanders said of Cosmic Aeroplane’s new digs. “It was like Mr. Toad’s Wild Ride. We didn’t have a clue what we were doing.”

The little neighborhood between 200 East and 300 East on 100 South was humming. Stephen Holbrook launched the KRCL-FM radio station upstairs in the building next door. And the alternative art house theater, The Blue Mouse, took residence in its basement.

By 1981, Cosmic Aeroplane made gross sales of over $1 million, Sanders said. The place always had been a hit for those who frequented the store, but it became a sudden, bona fide financial success.

One year later, Jones, too, was bought out by Roberts.

Cosmic Aeroplane lasted another 10 years, although its glory slipped year by year. The 1960s were not only over, but so were the ’70s. The plague of disco music had come and gone, and the world had changed.

But Cosmic Aeroplane lives — sort of. It cultivated fans and employees who went on to launch Catalyst magazine, Blue Boutique, Salt Lake Acting Company and other enterprises.

That raucous time and place remains in the memories of people who were once and forever young.

Greta deJong, who launched Catalyst after her days at Cosmic Aeroplane, summed up the counterculture aura that surrounded the shop in Salt Lake City: “It drew it and nurtured it, and, you could say, it created it,” she said. “It was pretty magical.” 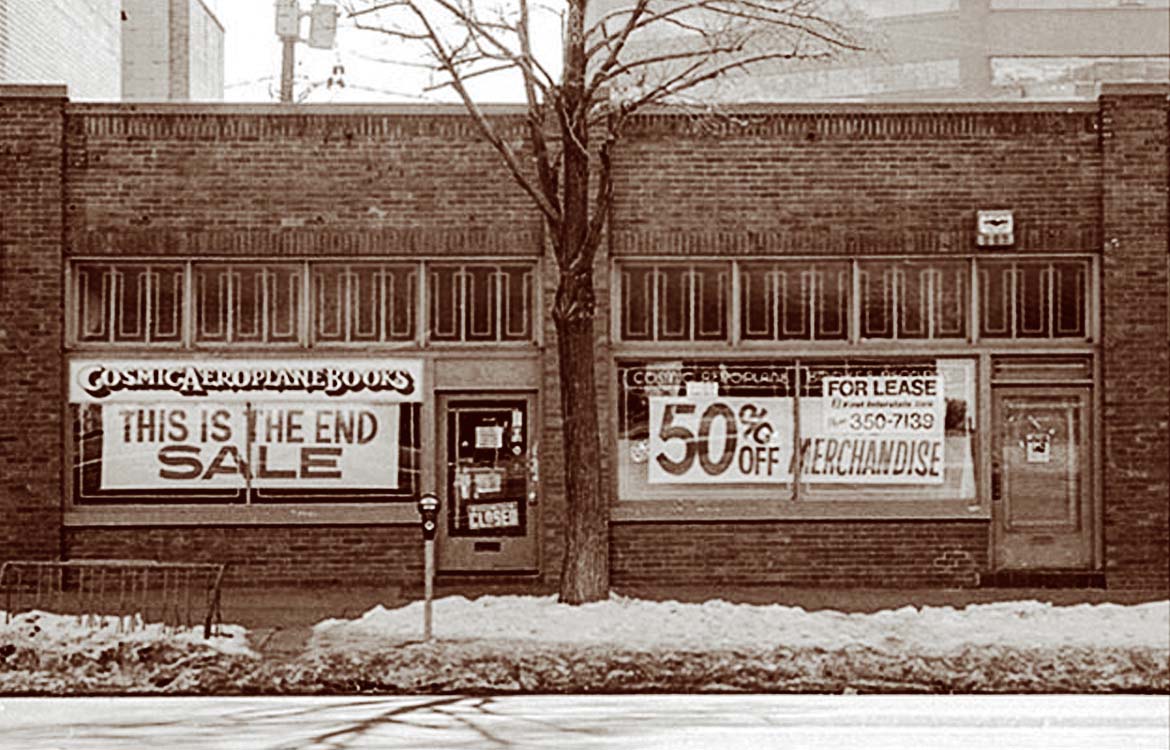 Photo courtesy Mike Evans
This picture by local photographer Steve Midgely shows Cosmic Aeroplane when it was closing down in 1991.

If you have a spot you’d like us to explore, email whateverhappenedto@sltrib.com with your ideas. Find past stories here.