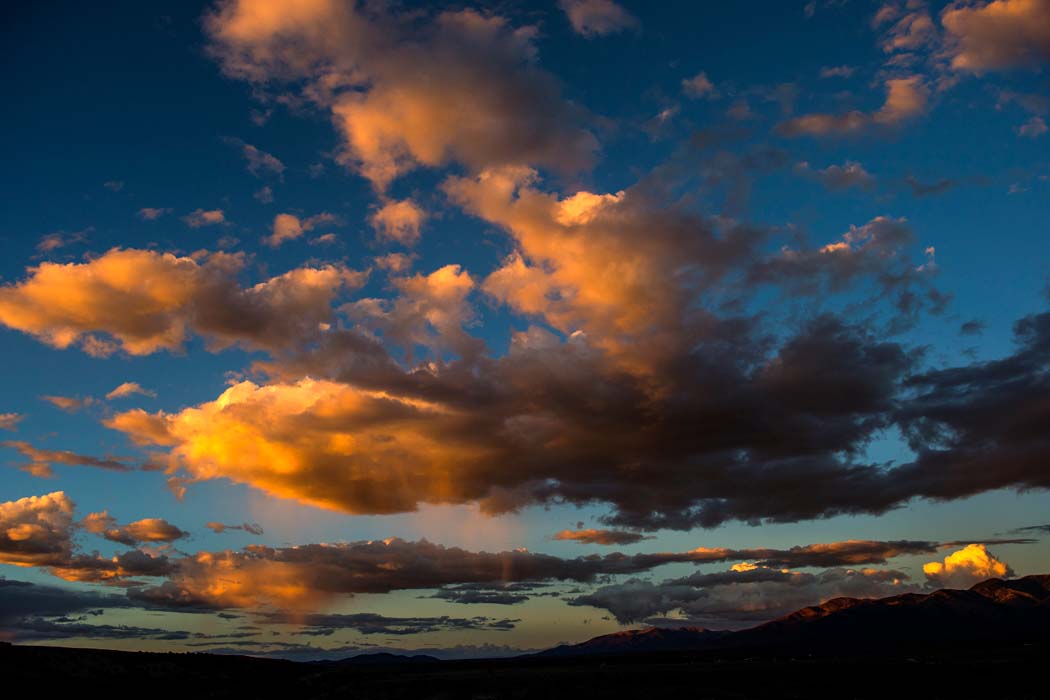 A small New Mexico town works to transform after a national monument was declared on its doorstep — a fate southern Utah is bracing for as Obama weighs a Bears Ears monument.

Questa, N.M. • If there’s one thing Bobby Ortega has learned over the years, it’s that federal proposals to improve land management usually end up complicating things. 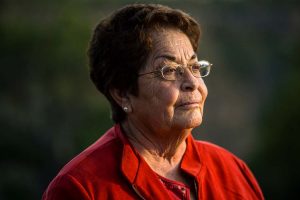 So he was a little nervous when his sister Esther Garcia, then Questa’s mayor, began lobbying Congress several years ago to establish a conservation area around the public lands framing the Rio Grande.

This 311,000-acre monument was Obama’s first landscape-level designation under executive powers specified in the 1906 Antiquities Act. He’s since established or enlarged 11 others in Western states covering nearly 4 million acres — mostly in the desert Southwest.

None is as large as the proposed 1.9 million-acre Bears Ears National Monument in southern Utah, where opposition to a monument is also outsized.

State and local leaders contend it would be a “catastrophe,” stymieing economic development, shutting down public access and perpetuating federal influence in the economically disadvantaged San Juan County.

Some 300 miles to the east in Questa, a village of 1,900 nestled where the Red River exits New Mexico’s highest mountain range, local officials’ attitudes couldn’t be more different. Ortega and others remain wary of the federal government, but they’re determined to leverage the land’s new status and see their town thrive. 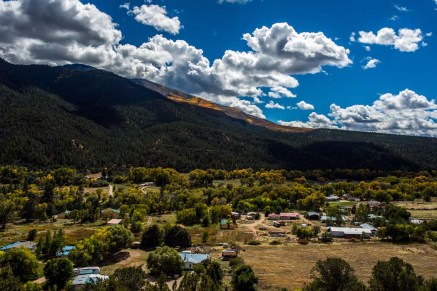 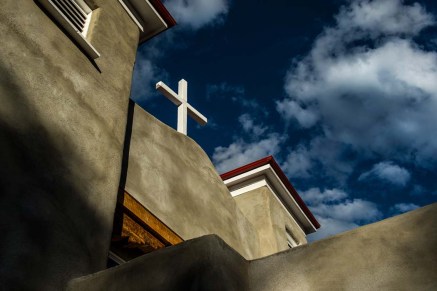 Many families in Questa hold land grants issued long ago by the Spanish colonial authorities. For generations they lived off these lands, herding sheep, growing barley and hunting.

Ortega and Garcia’s Spanish ancestors herded sheep on these lands, and their grandfather, rancher J.P. Rael, grazed land now inside the Rio Grande monument — a ranching tradition that persists to this day with Ortega’s 60-cow-calf cattle operation on public lands to the west of town. 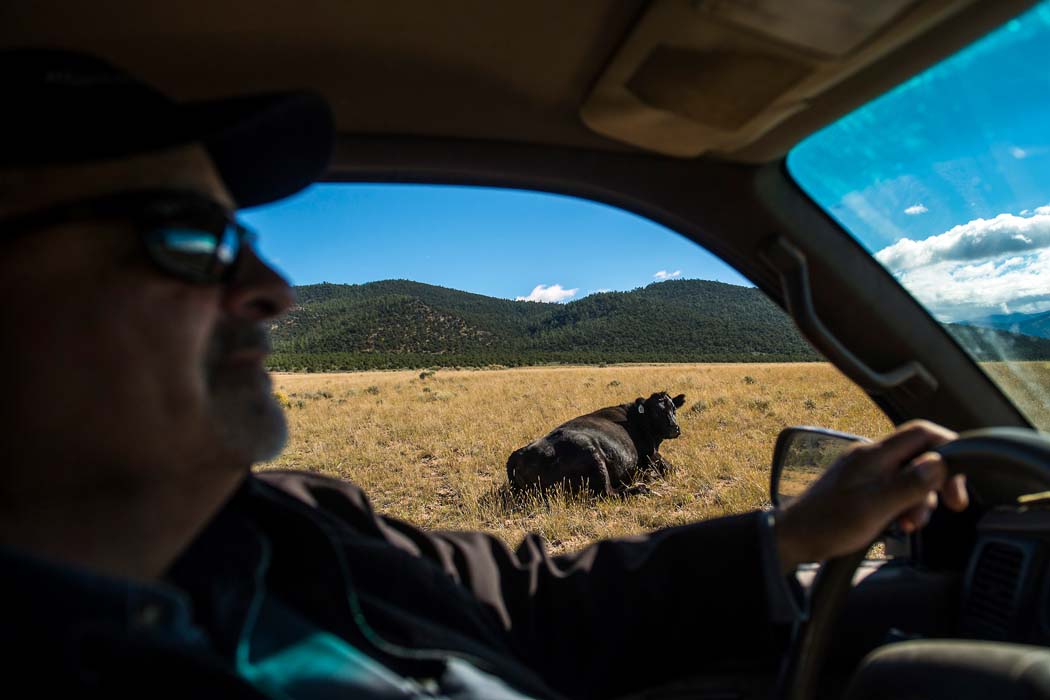 Garcia often visited a part of the monument known as Wild Rivers just west of town to cook out with her grandparents, tend cattle, gather pinyon nuts and enjoy the starry nights.

“It was family quality time. We would talk about the land. My grandfather was very much into protecting the land and the water,” Garcia says. “He said, ‘You see the water flowing in the acequias? Some day there won’t be enough and people will fight over it. You have to protect the water and the land. Without those two things, we become nonexistent.’

“Today,” she says, “I can sit and read and hear my grandfather’s voice telling me I need to conserve this area.”

For him, setting aside the gorge and surrounding lands has not been much of a sacrifice. It was not commercially tapped for minerals or timber, and does harbor big game, fisheries, scenery and other attributes worth preserving.

And, he believes, it provides a new tool to entice some of the 500,000 motorists passing through Questa each year on State Route 522 to stop

“If you have it as a national monument it kind of stays wild and untamed,” he says. “We take pride in Questa because it is still not tamed.”

A town in flux

The village has seen its share of setbacks and heartache in recent years. In 2008, part of the historic Iglesia de San Antonio’s wall collapsed, rendering Questa’s most central and prominent gathering place unusable. A few years later, Taos County’s largest employer, a century-old mine in the mountains east of Questa, shuttered for good, taking down 300 jobs. 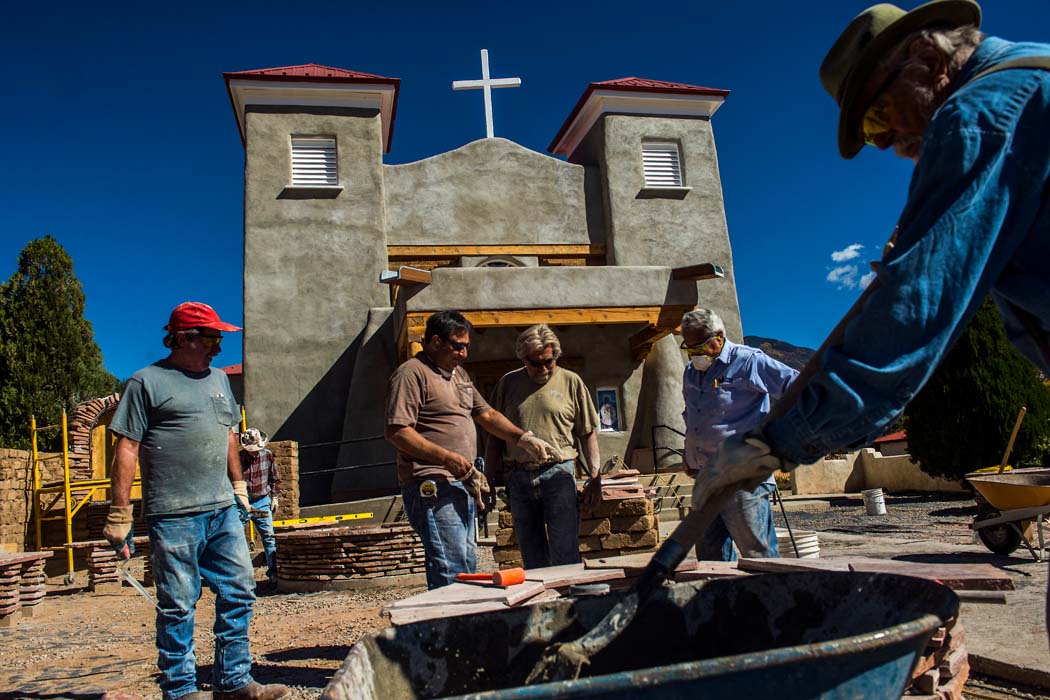 Visitation to the area is increasing, and dozens of outfitters tap Rio Grande del Norte and the nearby Sangre de Cristos to take clients trekking, horse-packing fishing, river-running and hunting. Yet the town lacks sufficient restaurants and accommodations to fully support a tourist economy. 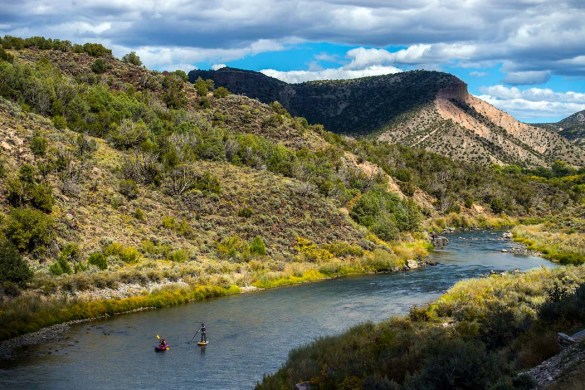 Kim Chatfield, right, and Mia Jennings, stand up paddle board and kayak on the Rio Grande Gorge near Pilar 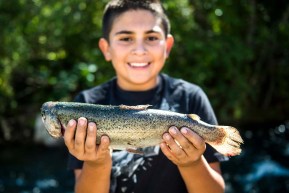 Isiah Jeantete, of Taos, shows off a fish he caught near the Red River Fish Hatchery 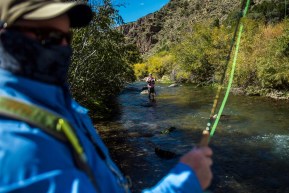 David Fitzpatrick, left, of Ft. Worth, Texas, and Evan Johnson, of Denver, fish near the Red River Fish Hatchery 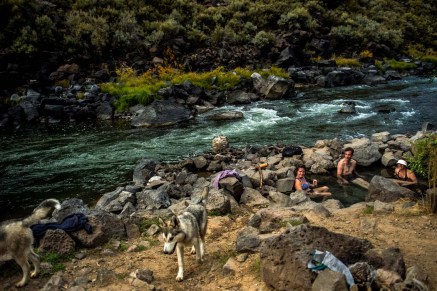 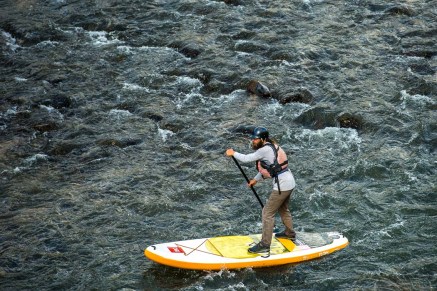 Like many other Questans, Ortega cobbles together a living from a variety of sources. He recently built a 44-stall RV park and also operates a gravel business.

“The town is reeling and looking for away to diversify and attract more tourism,” Ortega says. “I want to see how we can get people to stop and spend money.”

Locals are working with the BLM to develop a visitors center in Questa for the monument. Under development is an idea for a 16,000-square-foot facility known as “The Resolana,” or a place to share ideas, supported by a fund set up by the Chevron Corp. to shore up Questa’s economic future after the company closed its molybdenum mine. 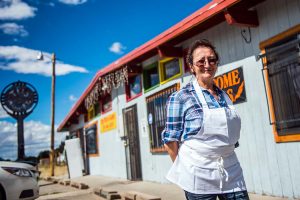 She operates out of a former bar in Cerro on the road leading from Questa to the monument’s Wild Rivers area on the river’s east rim, overlooking the 800-foot-deep gorge. Every year business has grown and she is now considering expanding with a shop to sell gifts and fishing tackle.

“This year was awesome,” Sandoval said, noting that the monument is “here and it’s not going anywhere. It has really helped us. We’ve had people from everywhere, even Russia. Without the mine there has to be something else, hiking and the outdoors, we can’t let it turn to a ghost town.”

Whether a national monument helps or hinders the town’s economic future remains unresolved, but New Mexico’s experience with the Antiquities Act may be instructive to Utah and Arizona as these states brace for widely anticipated designations: Bears Ears and Greater Grand Canyon, respectively.

In Utah, a coalition of tribes petitioned the Department of the Interior to preserve 1.9 million acres surrounding the sacred Bears Ears Buttes as a monument, triggering Utah’s most intense public lands controversy since the 1996 designation of the Grand Staircase-Escalante National Monument. Utah’s Garfield County blames that monument for an alleged decline in school pupils, ranching and economic activity in general.

The proposed Bears Ears monument, which includes Cedar Mesa and the Abajo Mountains, contains the nation’s most dense concentration of archaeological sites and is considered a cultural landscape of scientific and spiritual significance.

The San Juan County Commission is fighting back, spending $53,000 on consultants Angus McIntosh and James Carlson to produce a report advancing the claim that the BLM and Forest Service lands proposed for a monument are not “public” under the meaning of the Antiquities Act. At the county’s expense, the consultants were to travel to Washington, D.C., to argue that Obama can’t establish a monument there because ranchers hold private property rights to grazing allotments — even though Utah Attorney General Sean Reyes’ point man on public lands issues has shot down such claims in meetings with ranchers around the state.

Commissioners are also weighing whether to set aside up to $500,000 for a legal challenge — using the same lawyers who are developing a lawsuit to take title to 31 million acres of public land — should Obama declare a monument.

There is similar opposition to the proposed Greater Grand Canyon Heritage National Monument just across the Utah border in Arizona.

The devil’s in the details

Ortega, who coordinated the church reconstruction in Questa, remains worried about unnecessary restrictions the monument could impose on his cattle operation. Back when the Rio Grande was designated a wild and scenic river, the BLM stopped him from watering his cows in the river to protect riparian habitat, even though he says there was no proof cattle posed a problem.

“As ranchers we are stewards of the land. The land wouldn’t be considered for a monument if we had been abusing it,” says Ortega.

“I’m leery of the government. Whenever the government says they are doing something good for me, I get screwed,” he adds. “The devil is always in the details.”

He saw the Rio Grande del Norte designation as “a bit of a land grab,” he says, but hopes federal land managers will “live to their word and manage it for the benefit of all the people.” 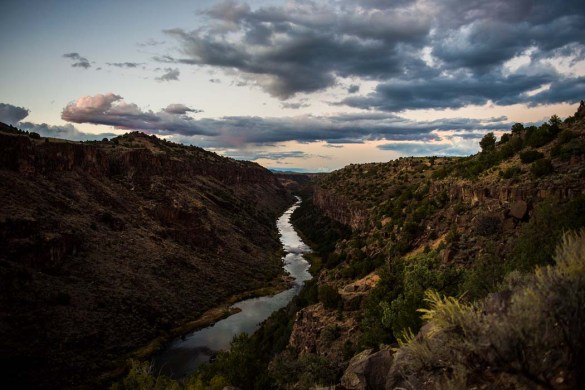 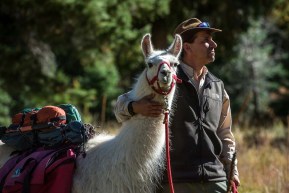 Stuart Wilde, of Wild Earth Llama Adventures, poses for a portrait with his llama Picchu near Columbine Campground 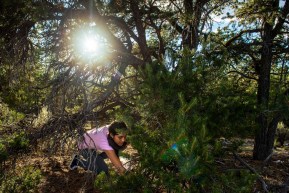 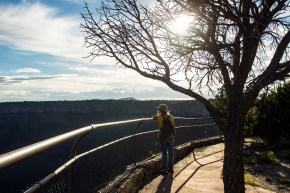 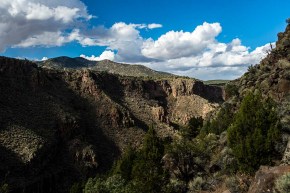 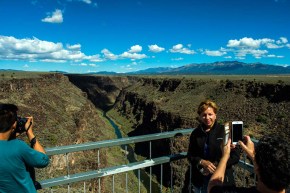 Tourists on Rio Grande Gorge Bridge. The bridge is 565 feet above the Rio Grande river.

The BLM owns most of the land in the monument, but inholdings abound: 39,000 acres of New Mexico state trust sections and 29,000 private acres. State officials are concerned the monument could render trust sections inaccessible for generating revenue for schools.

The BLM has signaled a desire to exchange these sections, along with state sections in Organ Mountains-Desert Peaks National Monument at the south end of New Mexico, for federal land the state has picked elsewhere. Yet the trade has yet to make much headway after more than three years.

“We want to continue working with them to see if they will be true to his word,” says Emily Strickler, communications director for the New Mexico State Land Office. “If you’re going to make these designations and landlock these parcels, give us other lands to trade with us. We have done all this work to get the process going, but there has been a dragging of feet on the other side.”

Utah officials are concerned a similar situation could surface in a Bears Ears monument, where there are at least 151,000 acres of Utah state trust sections, including one at the southern tip of Comb Ridge the state auctioned Wednesday for $500,000.

But monument backers say the majority of these state inholdings will never be moneymakers and a monument will at least give the state an opportunity to consolidate their trust holdings in areas more suitable for development.

Meanwhile, the BLM is poised to release a draft management plan for Rio Grande del Norte.

Esther Garcia says participation by ranchers and other locals in such plans will be crucial to preserve their vision for the land.

“If you don’t do it, they will propose it on you,” Garcia says. “It’s better to have a voice.”

During his nearly eight years in office, Obama has invoked the Antiquities Act 26 times, setting aside more land, ocean and historic sites aside for conservation than any other U.S. president. Among these designations are 12 Western-state landscape-level designations, covering nearly 4 million acres.