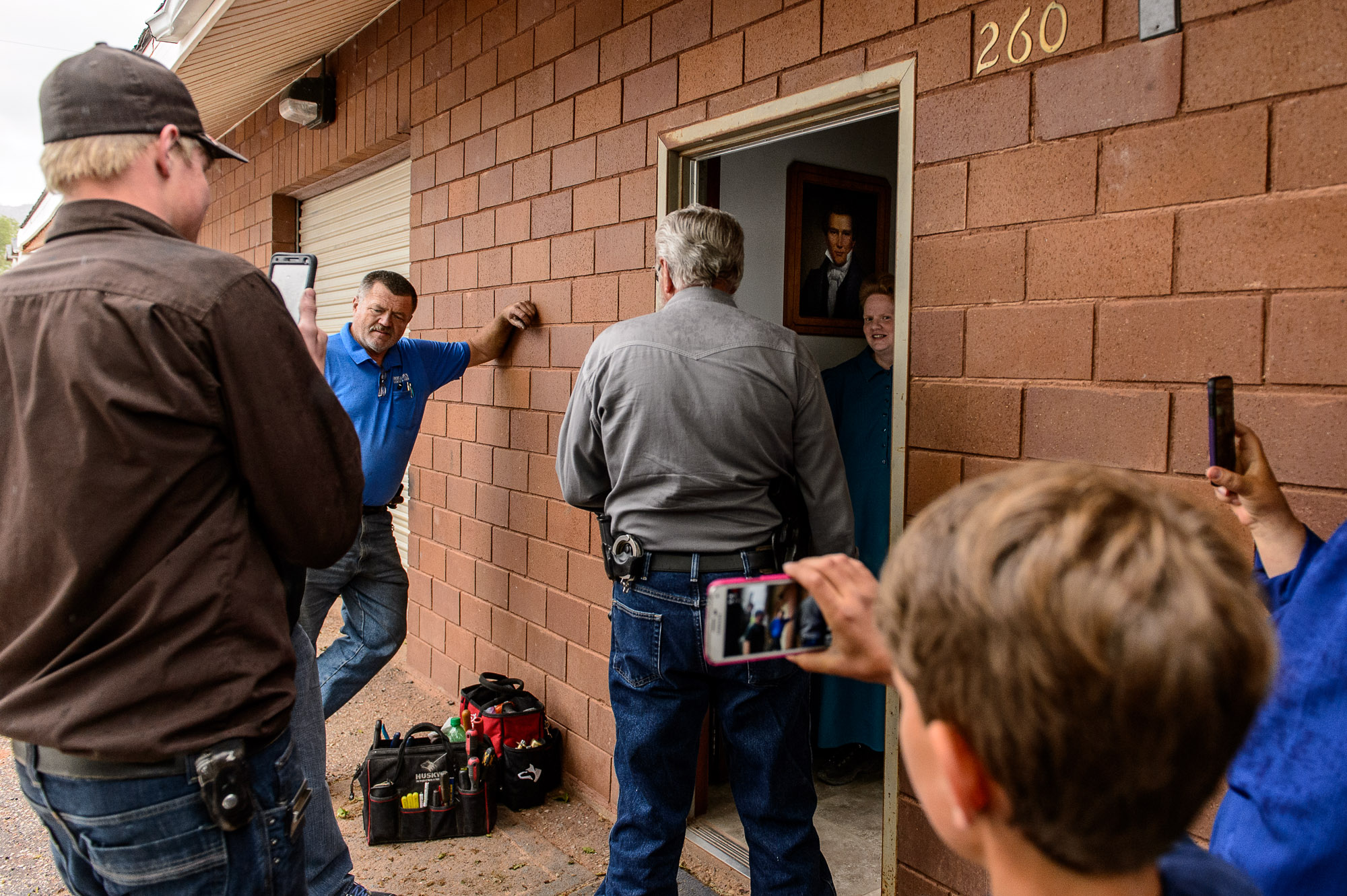 Evictions in polygamous town include traveling band of onlookers

Story by Nate Carlisle and Photos by Trent Nelson 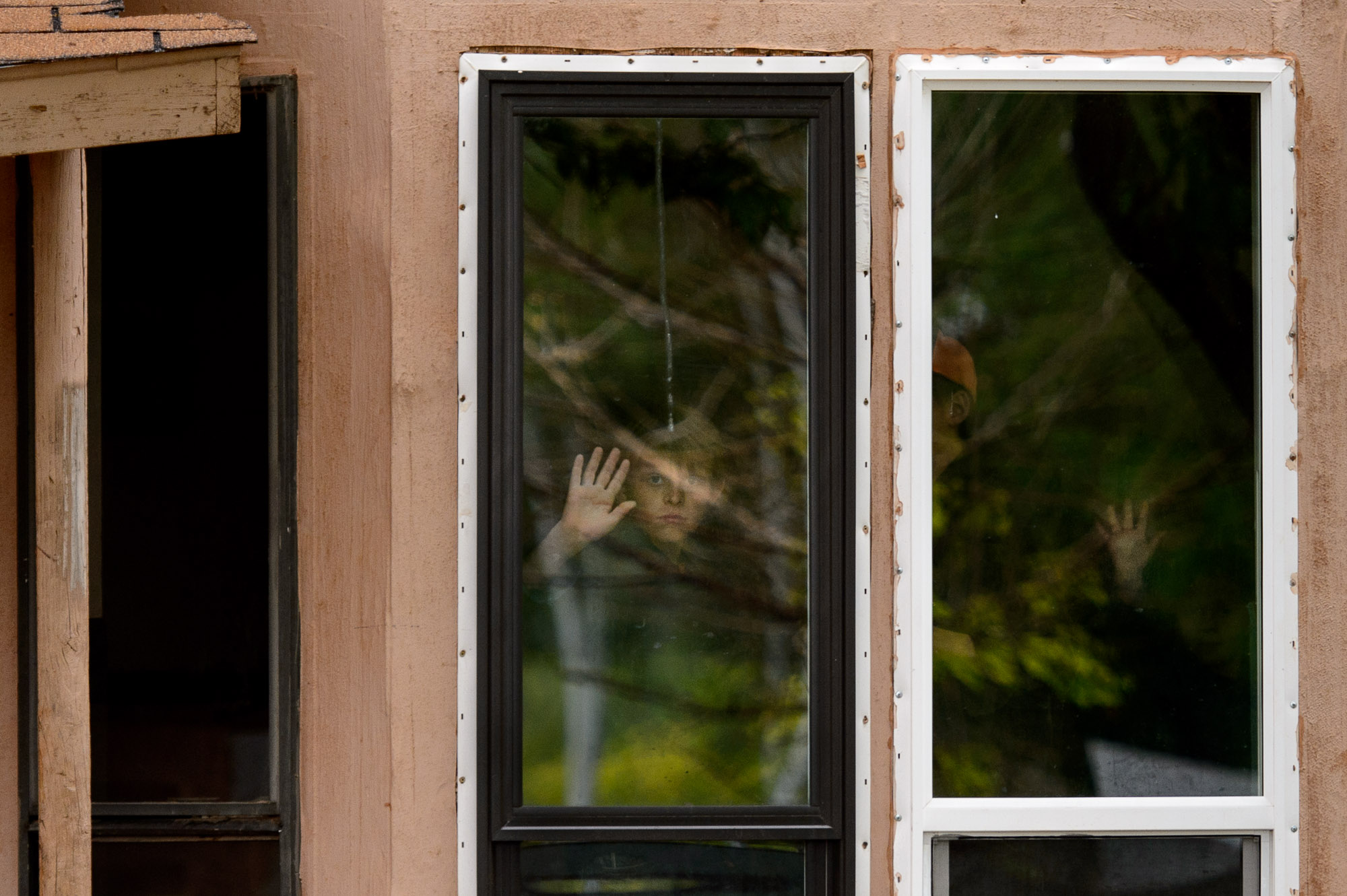 Colorado City, Ariz. • The children inside 345 Richard St. waved through the picture windows with one hand and held up cellphones with the other.

Their friends outside on the sidewalk smiled and waved back. Some of them held up their own phones.

It wasn’t a game. They were recording video of members of the “eviction team,” as some here have taken to calling them, who were using tools to force open the back door and enter the house.

The children and mothers inside, all members of the polygamous Fundamentalist Church of Jesus Christ of Latter-Day Saints, chose not to open the door for them. 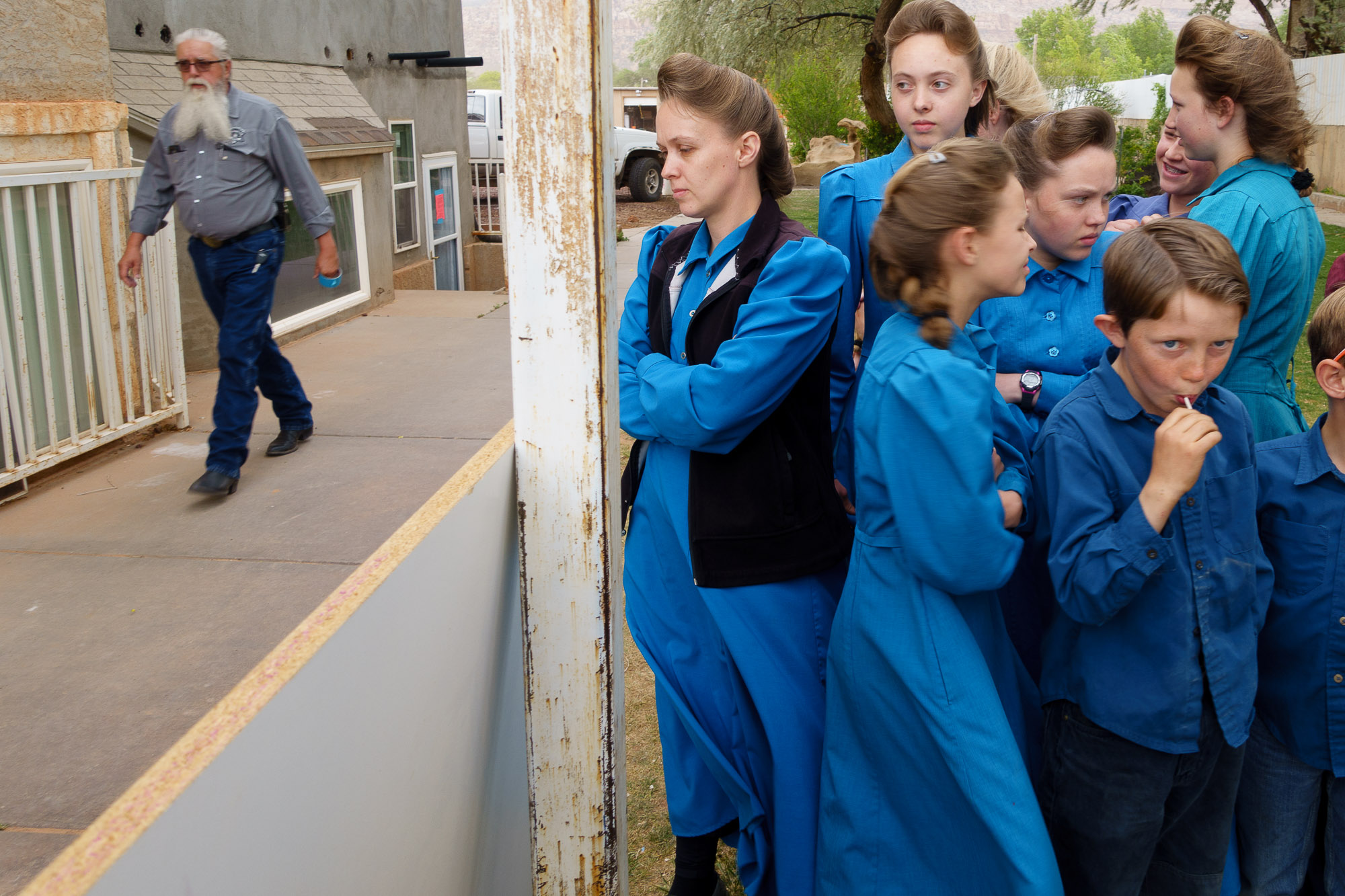 The evictions underway here and in adjoining Hildale, Utah, collectively called Short Creek, have created spectacle and sport among the heartache. Salt Lake Tribune journalists watched 15 evictions of homes and commercial properties over three days last week, part of an ongoing exodus in which many FLDS members are leaving the community because they don’t want to work with the land trust called the United Effort Plan (UEP), which owns the homes. Because the houses to be evicted are all served with notices weeks before the team arrives, the FLDS have usually removed all but a few personal possessions and have spent the previous few nights already sleeping elsewhere.

They’ll return to the homes to be booted out shortly before the eviction team arrives. 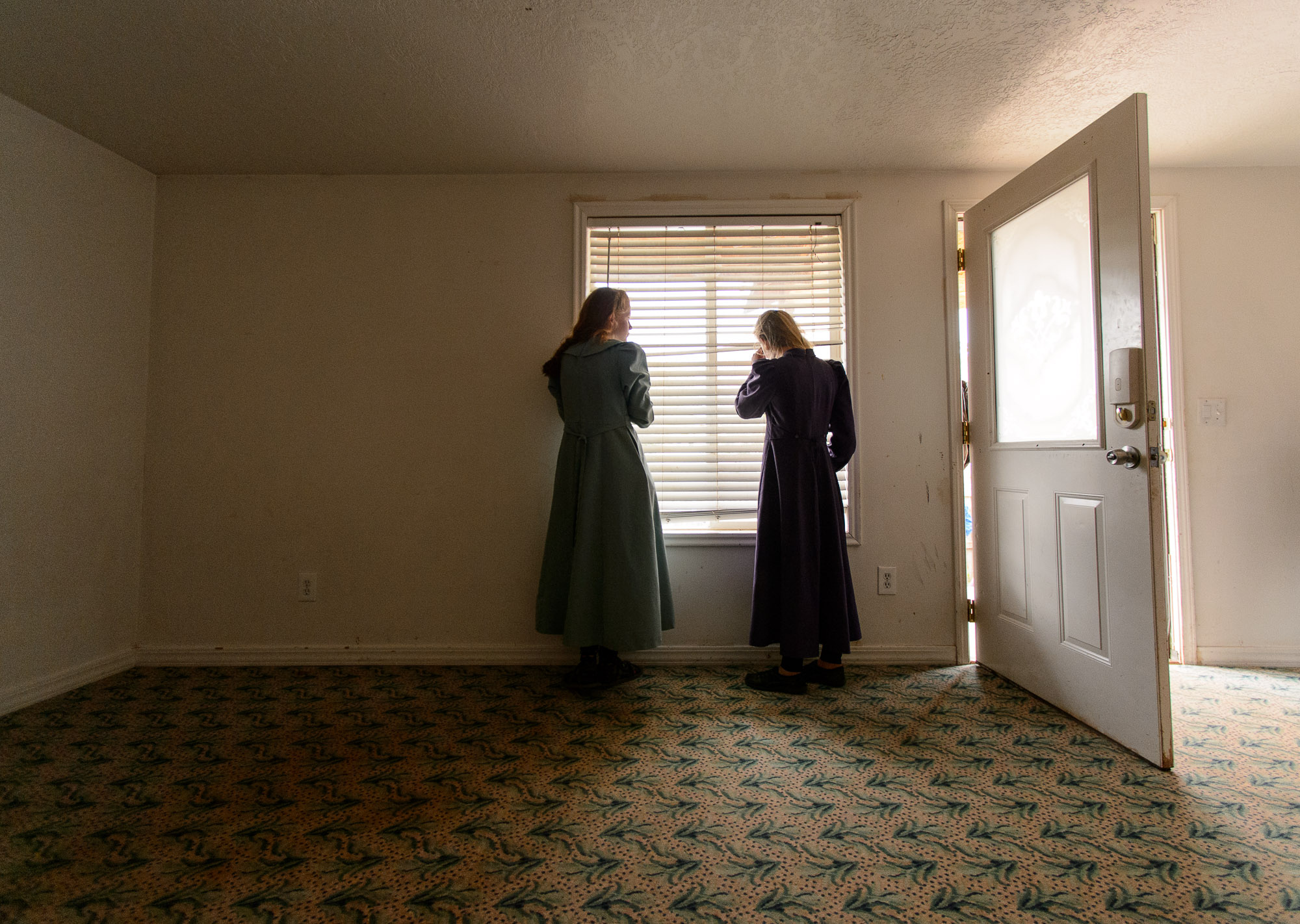 Two FLDS girls peer out from a home as the UEP Trust changes the locks on the house across the street.

At one house where the eviction team was expected Wednesday, 16-year-old Marvin Darger gave a tour of the empty second-floor living quarters. Even the appliances had been removed.

FLDS members have shown they are willing to remove anything not held down by concrete. These days, sheds and even modular homes are common sights on the streets of Short Creek. FLDS members use industrial loaders to lift the structures onto flatbed trailers and then haul them to another lot ahead of the next eviction. 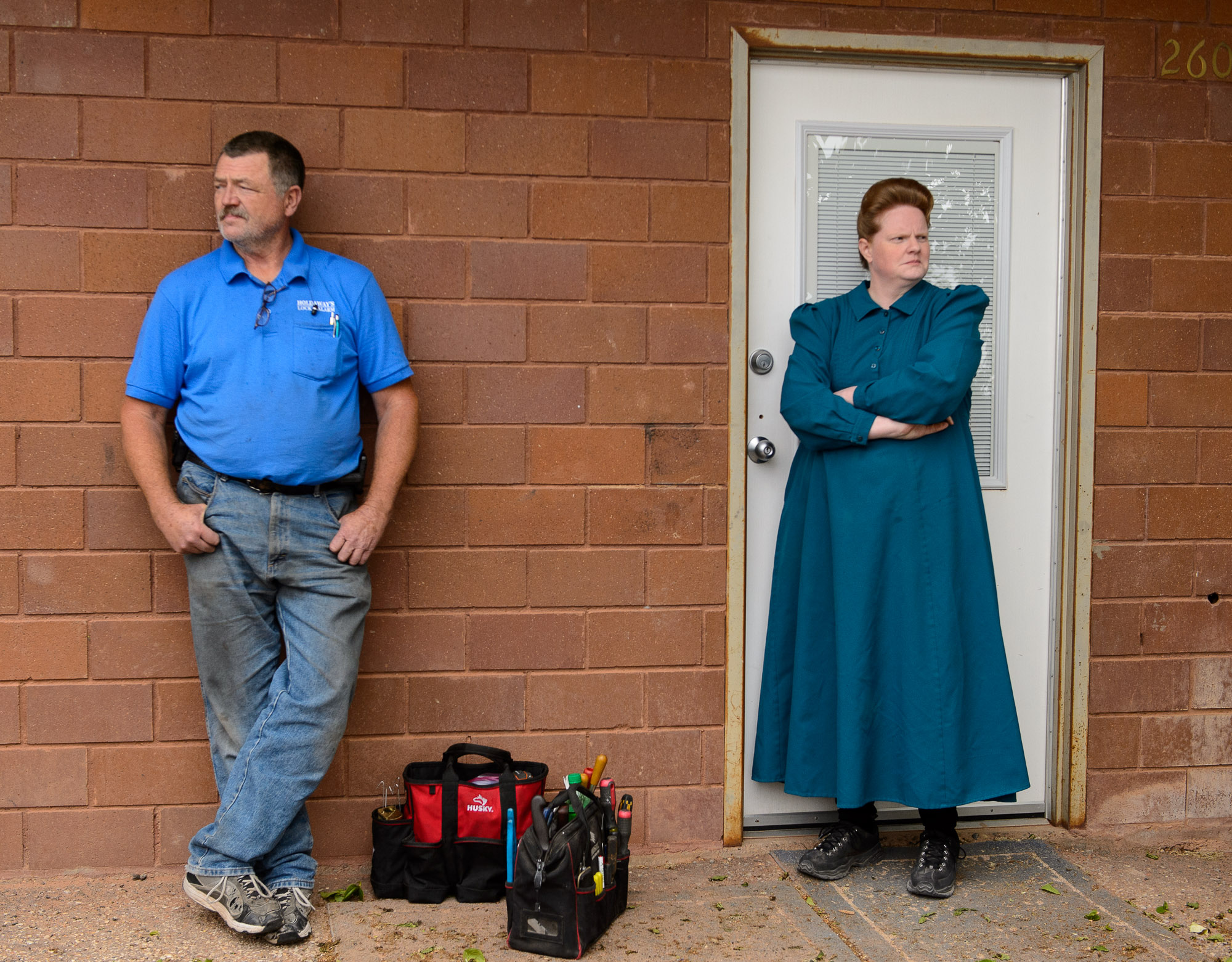 Locksmith Kelvin Holdaway and FLDS member Julia Johnson stand outside of a Colorado City, Ariz., property awaiting a decision on her eviction.

FLDS members know where the eviction team is and, because everyone knows which houses have been served and when the deadlines are, they can guess where it is going next. A dozen or so women and children in prairie dresses or long-sleeve shirts follows the team from one house to another the way sports fans at a golf tournament trail a superstar golfer from hole to hole.

An FLDS girl takes video as her family is evicted from a Colorado City, Ariz., home, Tuesday May 9, 2017.

Mohave County Constable Mike Hoggard orders FLDS boys away from a Colorado City, Ariz., home where the locks are being changed, Tuesday May 9, 2017. One of the boys had been taking videos of the eviction process, crossing the property line after it had been cleared.

The FLDS take photos and video of every eviction.

Referencing a moment in early Mormon history, Johnson went on to explain: “The saints were driven out of Nauvoo. We read about that.”

The photos and video, she finished, are “for our history.” 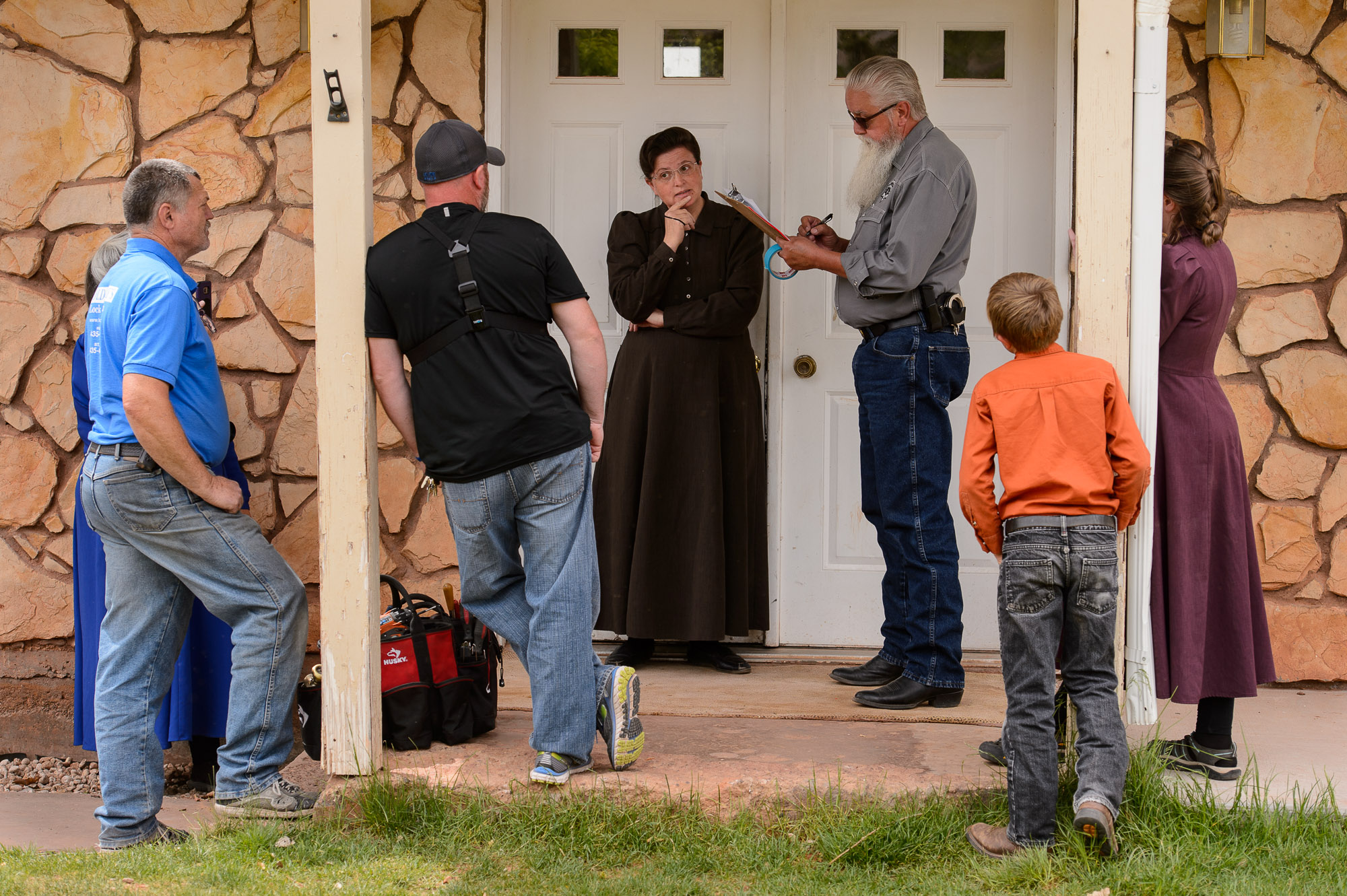 An FLDS woman confronts the eviction team as they prepare to evict her and her family from a home.

The eviction team includes the constable charged with serving court orders, a locksmith and Ted Barlow, who is a UEP employee. Of the three, the FLDS members are most hostile toward Barlow. He used to belong to the church and grew up with most of the people he’s evicting.

FLDS members consider him an apostate — something far worse than the gentiles working with him.

At one house he evicted last week, Barlow playfully, quickly put his hand up in front of an 11-year-old boy’s cellphone camera.

“You’re trying to hide your evil deeds!” the boy yelled at Barlow.

A group of FLDS children, themselves facing eviction, watch and take photos of a woman being evicted from a home in Colorado City, AZ, Tuesday May 9, 2017.

FLDS members watch over a fence as the locks are changed on an empty home in Colorado City, Ariz., Tuesday May 9, 2017, as part of the UEP Trust evictions.

An FLDS girl sticks out her tongue at a photographer while, in the background, a women takes video of a UEP employee coordinating her eviction from a Colorado City, Ariz., home, Tuesday May 9, 2017.

FLDS children watch from the top of a rock as the UEP Trust changes the locks on a Colorado City, Ariz., home, Wednesday May 10, 2017.

At some homes, FLDS members ask Barlow why he is forcing them out. Barlow tells them they can stay if they just sign an agreement with the UEP.

An FLDS girl stands in the doorway of a Colorado City, Ariz., home as Mohave County Constable Mike Hoggard prepares to evict her family, Tuesday May 9, 2017.

An FLDS girl photographs as the locks are changed during on an empty home in Colorado City, Ariz., Tuesday May 9, 2017, as the UEP Trust takes control of the property.

FLDS children look on as the UEP Trust takes control of a Colorado City, Ariz., home across the street, changing its locks in an eviction, Tuesday May 9, 2017.

FLDS women and children stand outside of the Colorado City, Ariz., home they had just been evicted from, Tuesday May 9, 2017.

FLDS women and children in front of the Colorado City, Ariz., home they had just been evicted from, Tuesday May 9, 2017.

An FLDS boy stands in front of the Colorado City, Ariz., home he is being evicted from, holding flowers he would later leave on the hood of a UEP Trust employee’s truck, Tuesday May 9, 2017.

A young FLDS girl helps load a stack of bricks after her and about a dozen women and children were evicted from a Colorado City, Ariz., home, Tuesday May 9, 2017.

FLDS children take video and carry belongings as they are evicted from a Colorado City, Ariz., home by the UEP Trust after refusing to sign an occupancy agreement, Wednesday May 10, 2017.

Evictions were sporadic through 2015, but last year the state court judge overseeing the case in Salt Lake City gave more authority to a board of trustees — most of whom are former FLDS members. The trustees have decided to accelerate evictions of homes where taxes are due or for whom there are trust beneficiaries willing to sign an occupancy agreement and take responsibility for the property. FLDS members consider those beneficiaries willing to cooperate with the UEP to be apostates, too.

UEP Executive Director Jeff Barlow has repeatedly said no residents have to be evicted — they just have to sign an occupancy agreement and keep the property taxes paid. The trustees are even willing to defer the standard $100-a-month fee if that is the only sticking point.

As for the appliances, outbuildings and even homes being removed, the UEP considers them trust property, but employees have had no success in stopping their relocations.

At the house on Richard Street, two mothers and 11 children exited once the eviction team entered the home. Lydia Bateman, 53, crying, said her husband built the house, and they began living there in 1985. 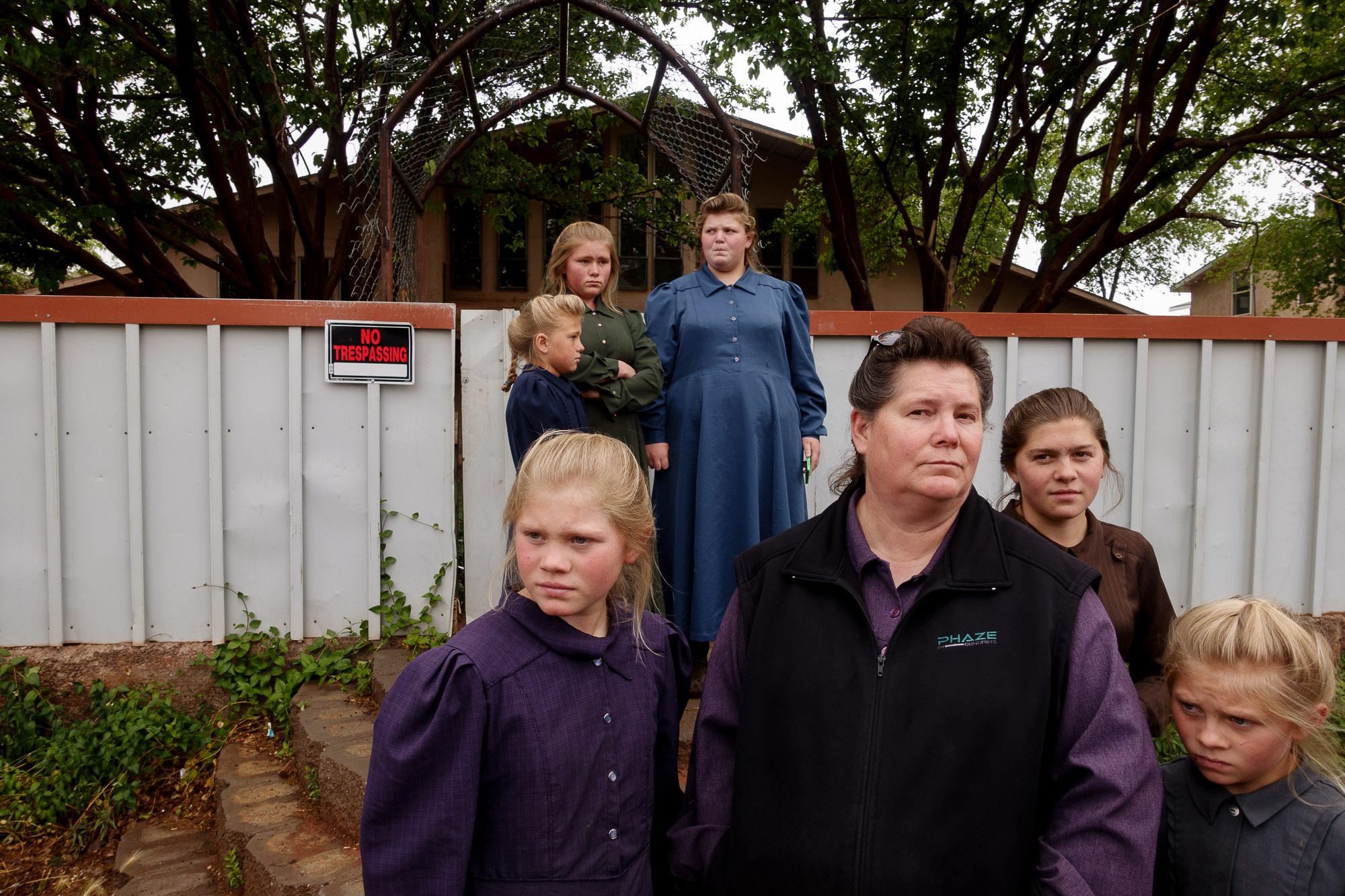 FLDS member Lydia Bateman with some of her children and grandchildren after being evicted.

She said she’ll temporarily stay in a small house trailer with some family. The boys living with her will sleep in a tent outside. Bateman wasn’t sure where her family would go for the long term, but she would like to move out of Short Creek, like so many other FLDS members.

“I guarantee you gentiles are not as bad as the people that are moving in here,” she said.

As Bateman wept and spoke with friends and family, Glen Johnson arrived. Johnson, 59, a tall thin man in a black Snap-on tools cap, last month hauled away a modular home from a lot in Hildale that had been served with an eviction notice.

“The Lord will place a heavy hand on your shoulder, too,” he told Tribune journalists watching the eviction. 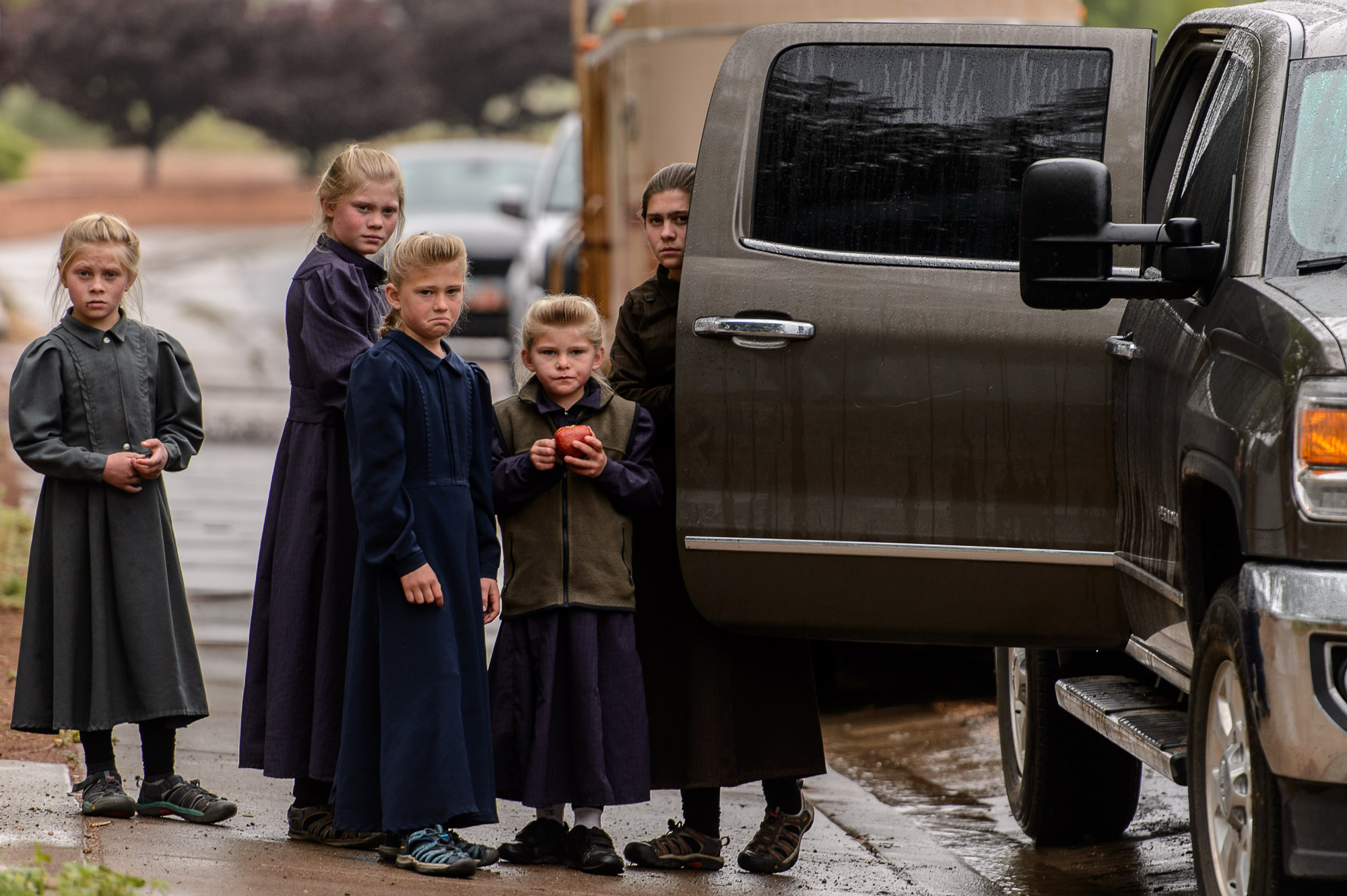 FLDS children after being evicted from a Colorado City, Ariz., home by the UEP Trust after the family refused to sign an occupancy agreement.

Part one of this series - Exodus of the FLDS