‘God’s providence brought us together’

New Catholic bishop points to the "sanctity of life," urges Utahns to help all reach their “divine potential.” 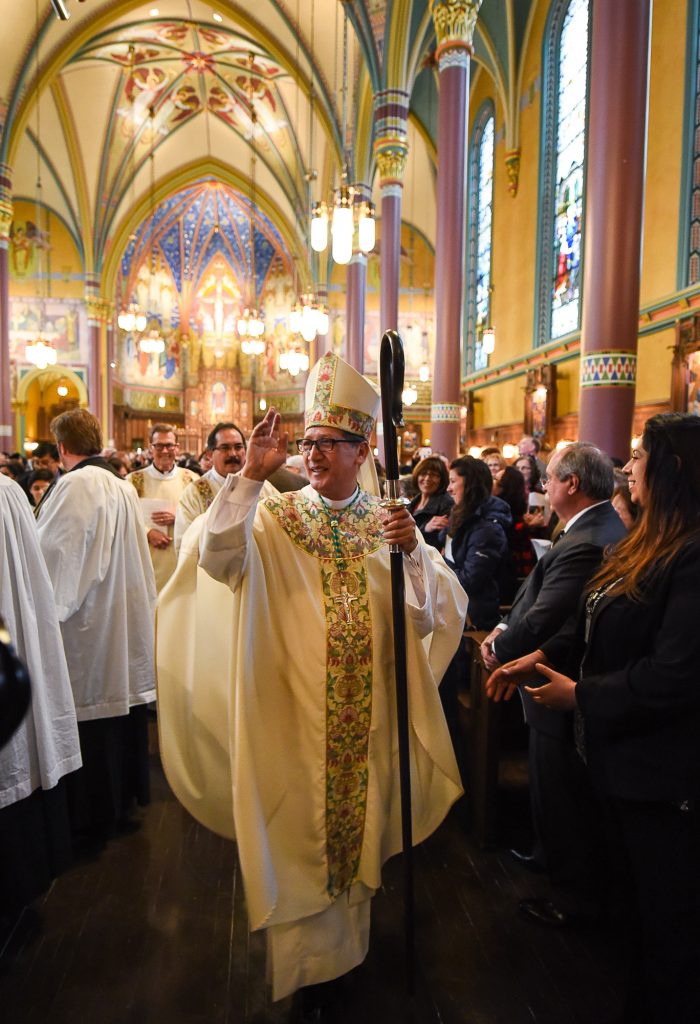 Francisco Kjolseth | The Salt Lake Tribune
Bishop Oscar A. Solis greets the congregation following his installment as the 10th bishop of the Diocese of Salt Lake City at the Cathedral of the Madeleine on Tuesday, March 7, 2017.

Utah’s newly installed Catholic bishop stood before more than a thousand people packed into the pews inside the Cathedral of the Madeleine and urged them to remember his name.

“It is Oscar Solis, not Jesus Christ,” said the tall, eloquent bishop. “I am not the Messiah, just a humble servant.” 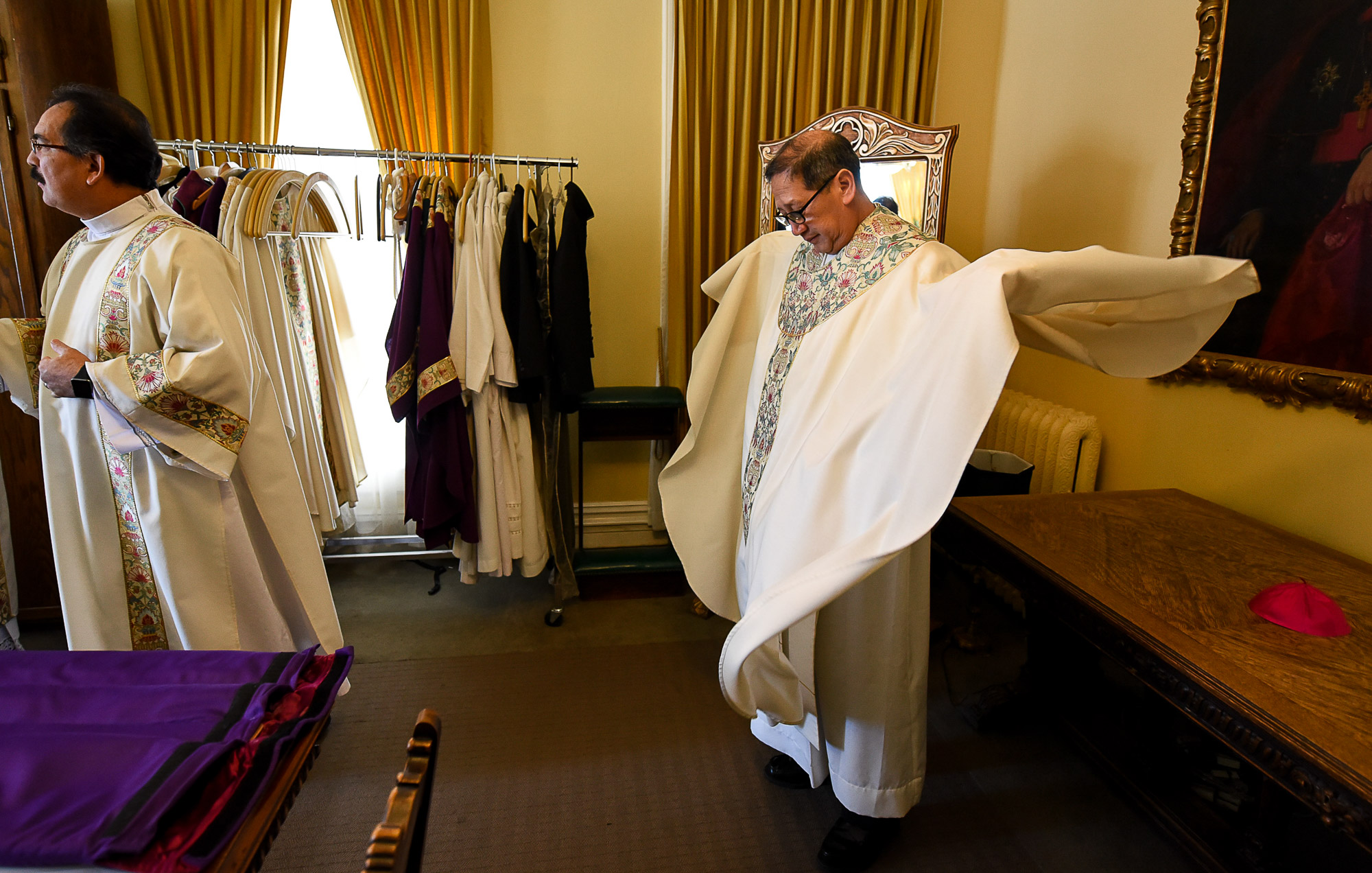 Francisco Kjolseth | The Salt Lake Tribune
Bishop Oscar A. Solis and other priests vest moments before his installation as the 10th bishop of the Diocese of Salt Lake City.

Such a self-deprecating reminder is characteristic of the nation’s first Filipino Catholic bishop, known widely as a man full of faith, but not full of himself.

Solis was installed Tuesday afternoon as the 10th bishop of the Diocese of Salt Lake City in an elaborately choreographed pageant of ritual, reflection and response.

It began with a reverent procession of men in multicolored plumed hats, followed by white-robed priests (including more than a hundred from his previous ministry in the Los Angeles Archdiocese) and miter-wearing bishops (including several from L.A. as well as at least one from Solis’ native Philippines) down the center aisle, while trumpets, organ pipes and choral music filled the sacred space. 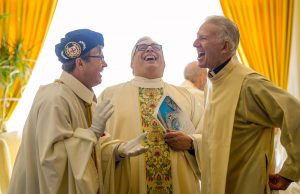 Francisco Kjolseth | The Salt Lake Tribune
Sir Michael Feeley, Monsignor Joseph Mayo and pastor Robert Bussen of Christ the King parish in Cedar City, from left, share a laugh during the vesting prior to the installation of Bishop Solis.

Pope Francis’ U.S. representative, Archbishop Christophe Pierre, said Salt Lake City was a “special portion of the Lord’s vineyard.” He praised Utah’s more than 300,000 Catholics, lauded their majestic headquarters cathedral (the only one in the United States named for Mary Magdalene) and read a letter from the pontiff, attesting to Solis’ suitability as leader and shepherd in the Beehive State.

Pierre then presented the new bishop with a staff, and Solis literally took the bishop’s seat, a thronelike chair facing the altar.

The affable man of God, who previously served as auxiliary bishop in Los Angeles, individually greeted a host of ecumenical and civic representatives who streamed up to the dais — including the Rev. Michael Imperiale of the nearby First Presbyterian Church, the Rev. France Davis of Calvary Baptist Church, imam Muhammed Mehtar of the Khadeeja Islamic Center, Salt Lake County Mayor Ben McAdams and Salt Lake City Mayor Jackie Biskupski.

The main attraction, naturally, was the new bishop — and he knew expectations were high, especially since Utah Catholics had been waiting for nearly two years for a new leader.

Just before he stepped up to speak, the cathedral’s music had built to an emotional and physical crescendo.

“I feel like I’m still in Hollywood,” Solis quipped as he began his remarks, drawing a laugh from the crowd.

He then asked the priests, deacons and laymen and laywomen of Utah to stand and be recognized for their efforts in holding the diocese together after the departure in 2015 of former Bishop John C. Wester, now archbishop of Santa Fe.

Solis shared his newfound awe for Utah’s history, culture and natural wonders — including the Wasatch Mountains and stunning redrock formations. 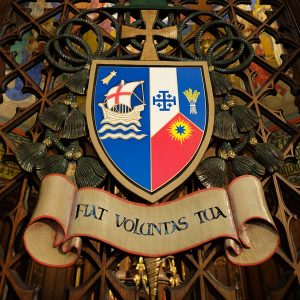 Francisco Kjolseth | The Salt Lake Tribune
With the installment of Bishop Oscar A. Solis as the tenth bishop of Salt Lake City comes a new coat of arms that is entirely his own. For his motto, the bishop adopted the Latin phrase “Fiat Voluntas Tua”, from the Lord’s Prayer “your will be done” (Matthew 6:10).

“We are here because of the tremendous work and ministry of … the men and women who dedicated themselves to this church,” he said. “This beautiful cathedral stands as a living testimony to the sacrifices of the Catholic community, working together with brothers and sisters of other churches and people of the state.”

Believers of all faiths, he counseled, must remain “witnesses in the midst of the many challenges we face in our world and in our nation.”

Catholics must work for religious freedom and to protect “the sanctity of life in all stages,” he said, to help immigrants and refugees, to be inclusive of all populations, and to help people “live and grow to reach their divine potential.”

It is important to “gather around this altar,” Solis said, “representative peoples of every race, ethnicity, cultural background, social status and even sexual orientation.”

Solis said he is intimidated by the legacy of his Utah predecessors — Wester and Bishops George H. Niederauer and William Weigand.

“It is quite frightening to follow these big dogs,” said Solis, who gave his sermon in English, Spanish and Filipino. “I can’t help but think of myself as a little puppy — and a mixed breed. … Except I’m an old dude.”

Despite the lofty company, Solis said he accepts the “sacred responsibility to nourish and nurture the people of Utah.”

Community members come from “different places, speaking different languages. Each has a different story and a different history,” he said. “God’s providence brought us together at this time and for a special reason … to proclaim the joy of the gospel, a call to live in unity and solidarity as God’s family, as a community of faith.”

Solis’ combination of modesty, profundity and humor seemed to win over the audience.

The installation was “inspiring,” said Clayton, the LDS general authority. “It was a sacred ceremony that drew us closer to God.”

Mehtar, the Muslim imam, loved it. “It showed that spirituality can have a positive impact on humanity.”

The Rev. Erik Richtsteig of Ogden’s St. James the Just Catholic Church had heard about the Filipino bishop from friends in the City of Angels.

Solis “definitely lived up to his reviews,” Richtsteig said.

The entire Filipino contingent had been praying for snow, Tapia said, while Utah Catholics had been imploring the heavens for better weather.

So when Tapia arrived in the midst of Sunday’s blizzard, she was delighted. With a sly grin, not unlike her bishop brother, Tapia said, the storm “shows that Filipino prayers are more powerful than Utah’s.”

After the Mass, as her 6-foot-2 brother towered above the Filipino faithful eager to get a photo on the cathedral’s steps, Pacubag was visibly moved by the splendor of the ceremony.

“It was,” she said without irony, “chilling.” 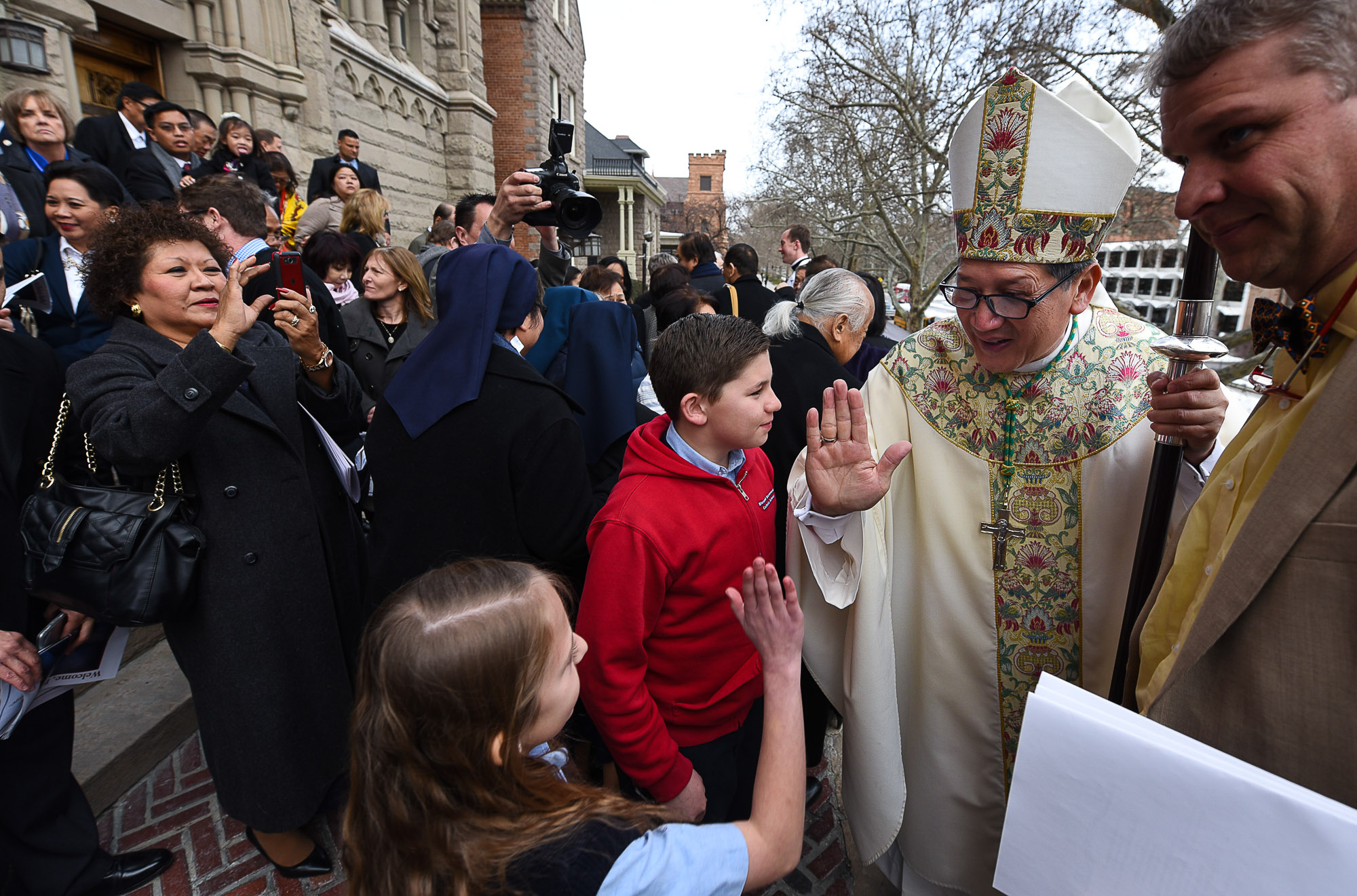 Francisco Kjolseth | The Salt Lake Tribune
Newly installed Bishop Oscar A. Solis greets his congregation following cervices at the Cathedral of the Madeleine on Tuesday, March 7, 2017.

View more photos from today To view comments on this story or add your own, click here.