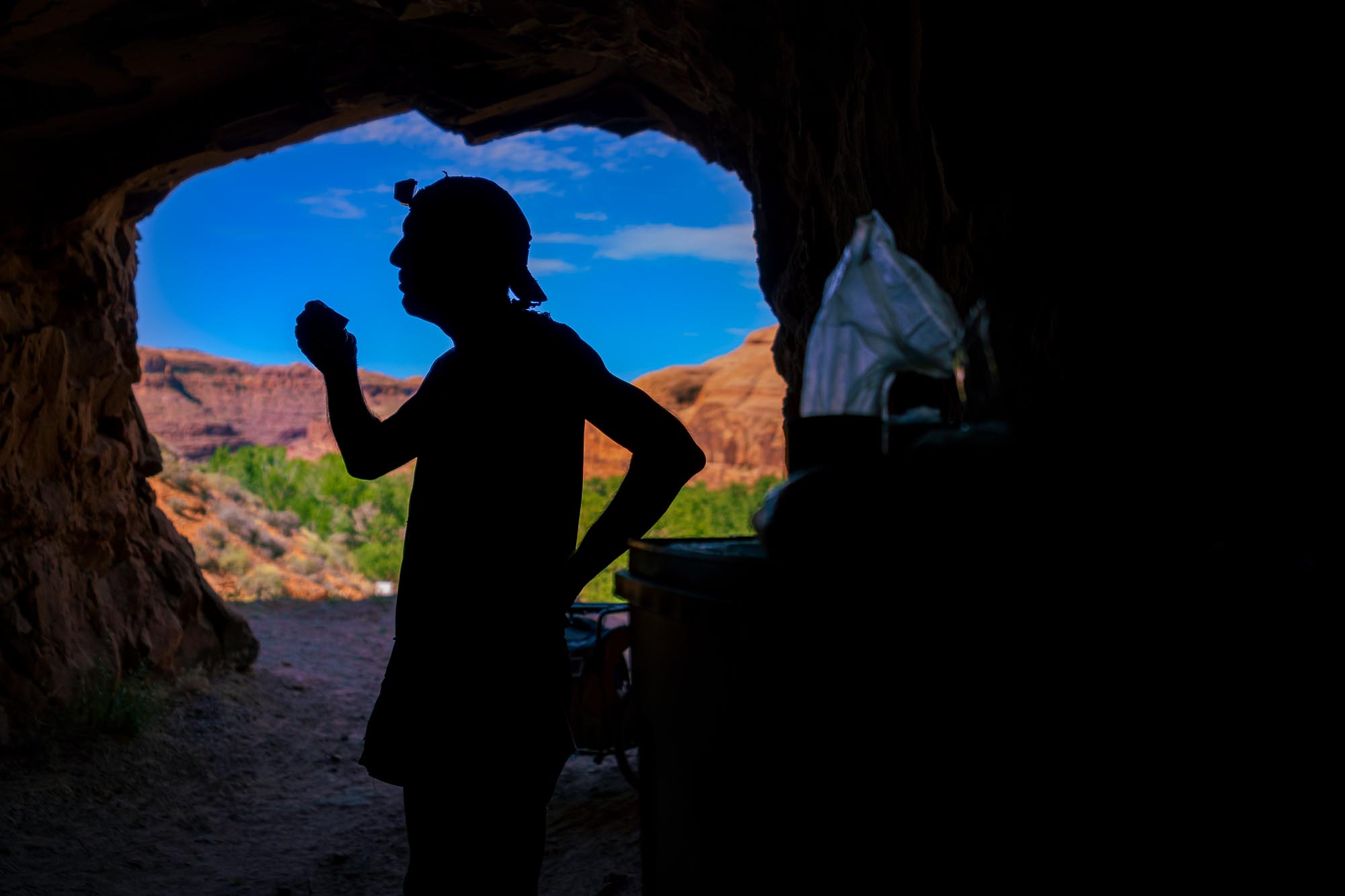 No refuge in
REDROCK

The number of people experiencing homelessness in the southeastern Utah tourist town of Moab is small but growing.

And Sara Melnicoff, an environmentalist-turned-homeless advocate, is a one-person safety net for many. 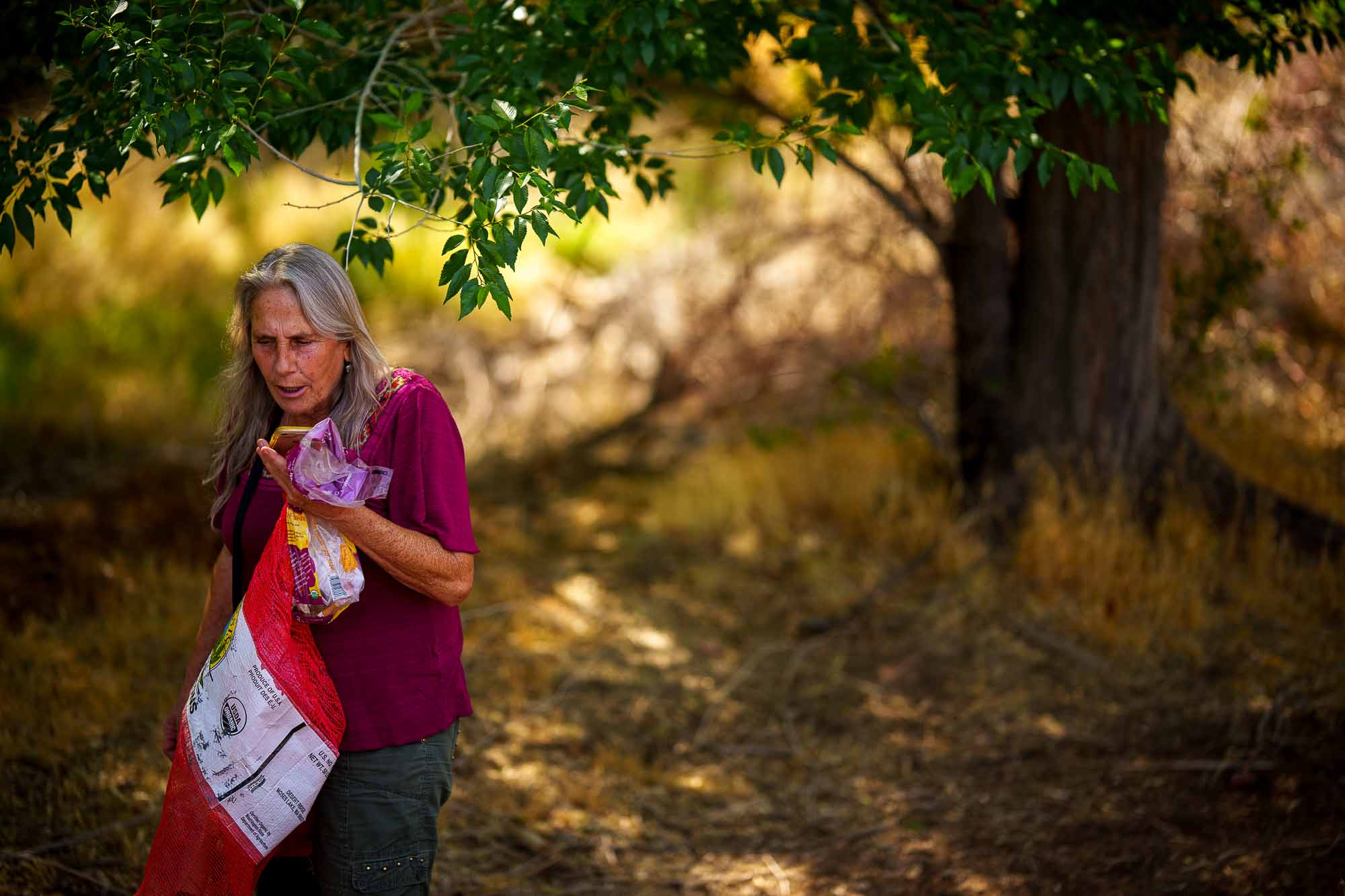 As she searched for campers near the Mill Creek river on a recent hot summer afternoon, her phone rang with a call from “PIN:” Person In Need. 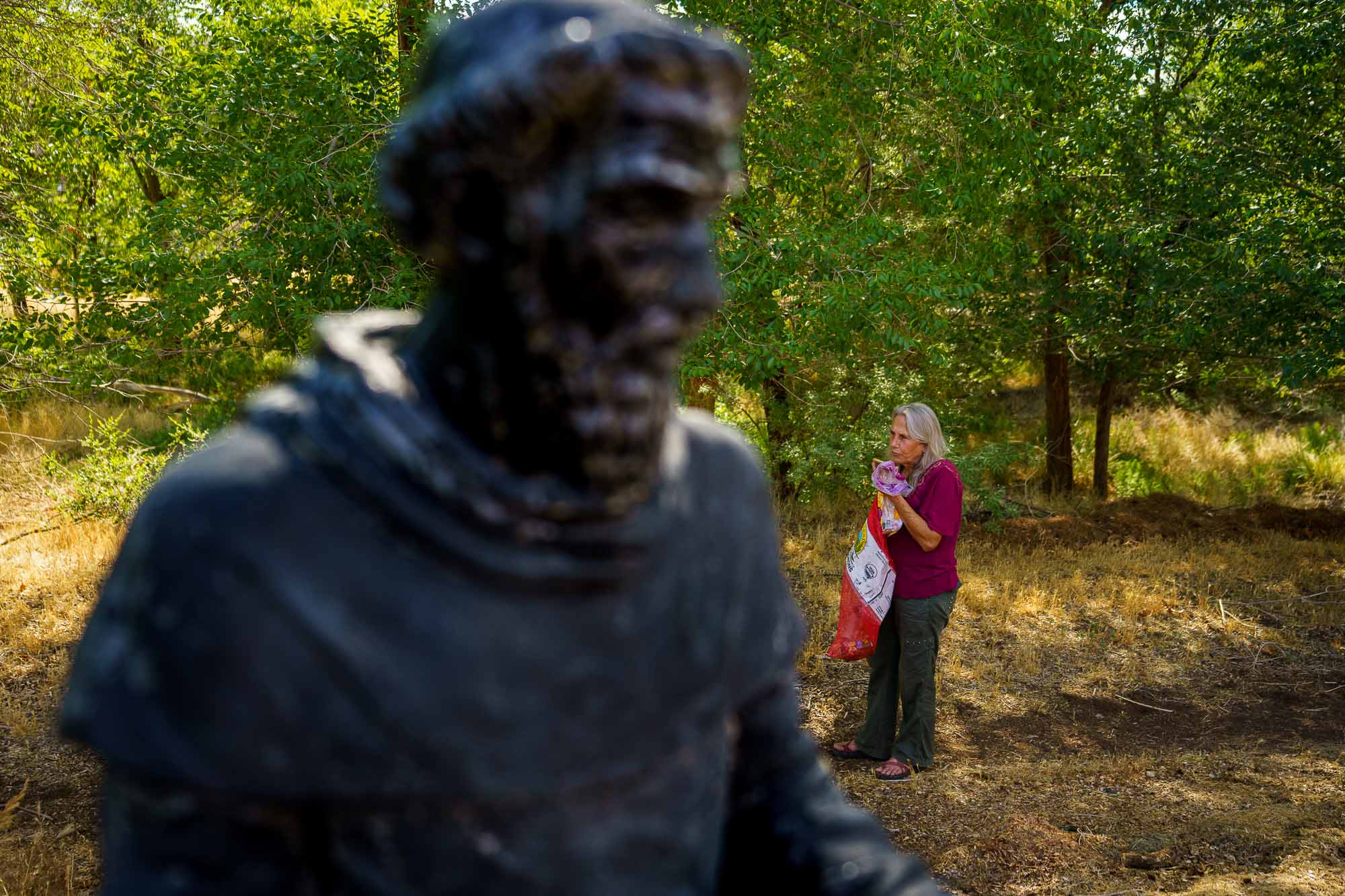 The “person in need,” Ruby, asks if she can secure the money for a motel, “just tonight,” from Melnicoff’s emergency fund.

Volunteers found 30 people experiencing homelessness in Grand County, from living outdoors to staying with friends or in a domestic violence shelter, during this year’s Point in Time count in January. Eighteen fit the federal government's official homeless definition — up from 12 the year before and a number some advocates say is likely an undercount. 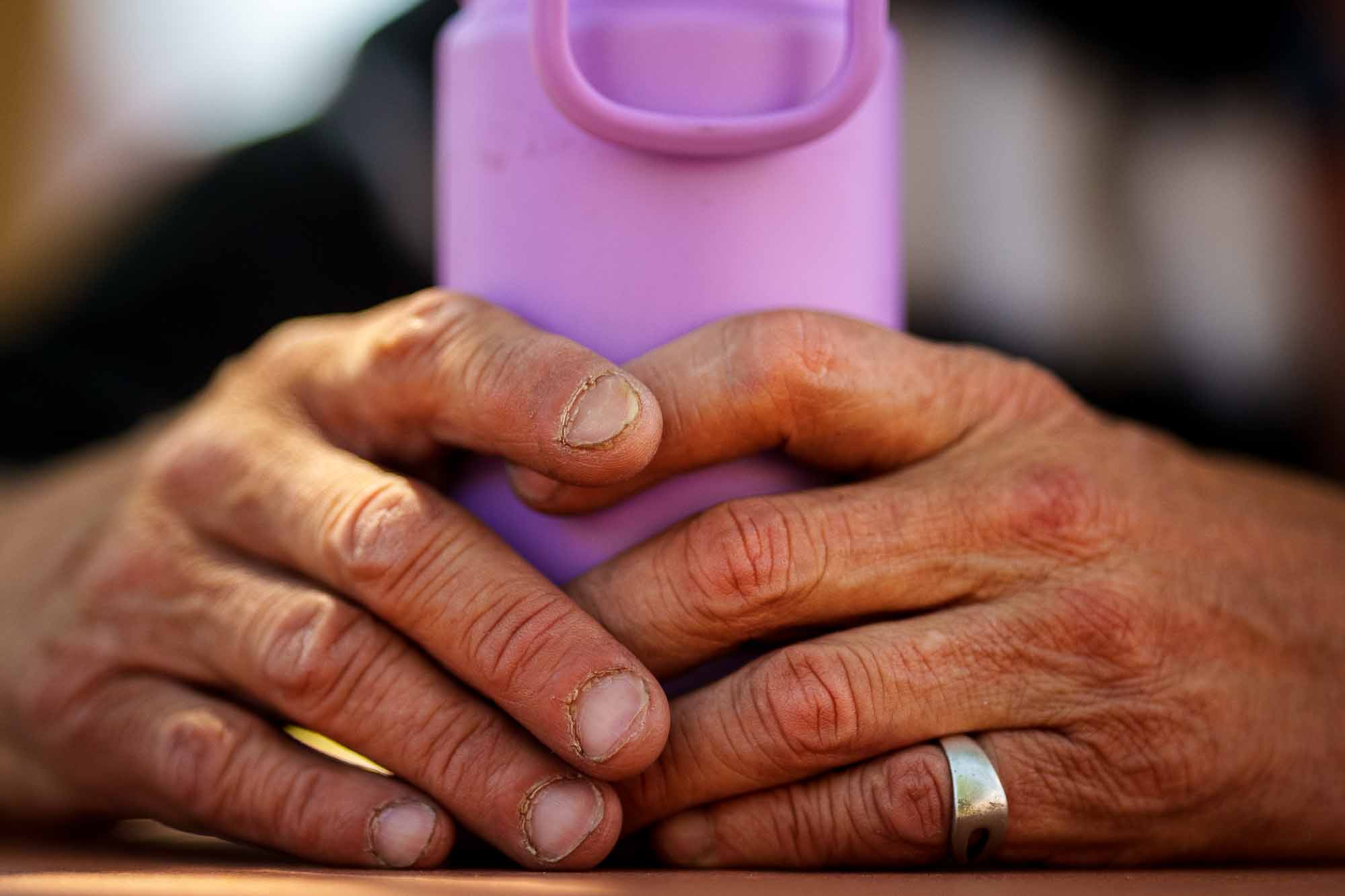 Some have been pushed into homelessness by rising housing costs — like “NewClear” Ned Robinson, a former radio DJ who lost his mobile home and important belongings when the property owner turned the land into an overnight RV park for tourists.

“I have lost so much,” said Robinson, who now lives in his car. Including, he said, “about the only picture of me when I was a toddler in existence.” 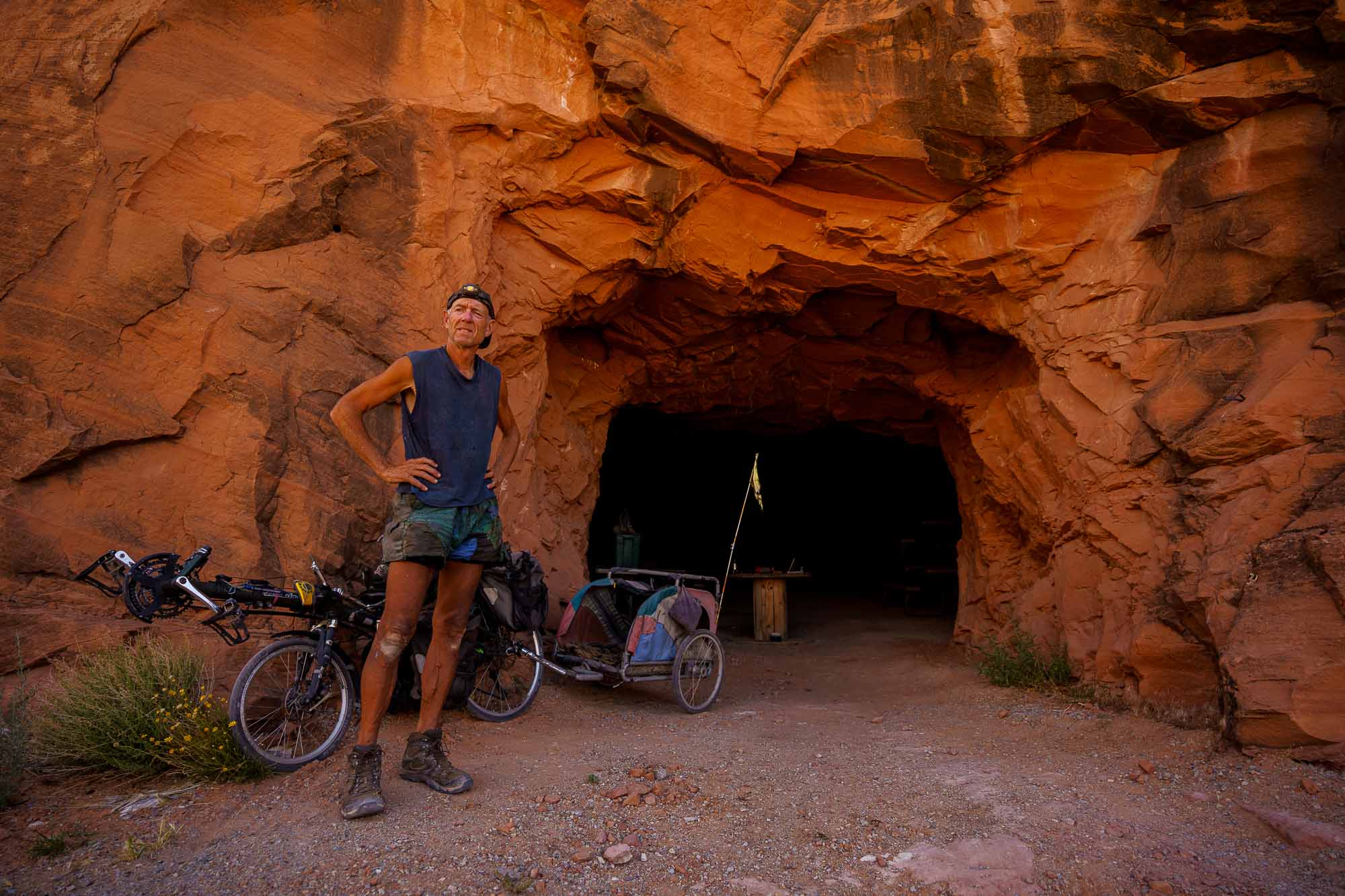 Others are self-proclaimed “dirtbaggers” like Mike “Marlow” Mewborn, who lives in a cave outside town and has declined housing. They sometimes blur the lines for service providers about who is homeless and who doesn’t need their help.

Mewborn said he often connects people to Melnicoff when he can tell they aren’t “house free” by choice, like he is. “Any time I run into a guy that’s obviously on the road, I call her and say, ‘Do you know about this guy?’” he said. 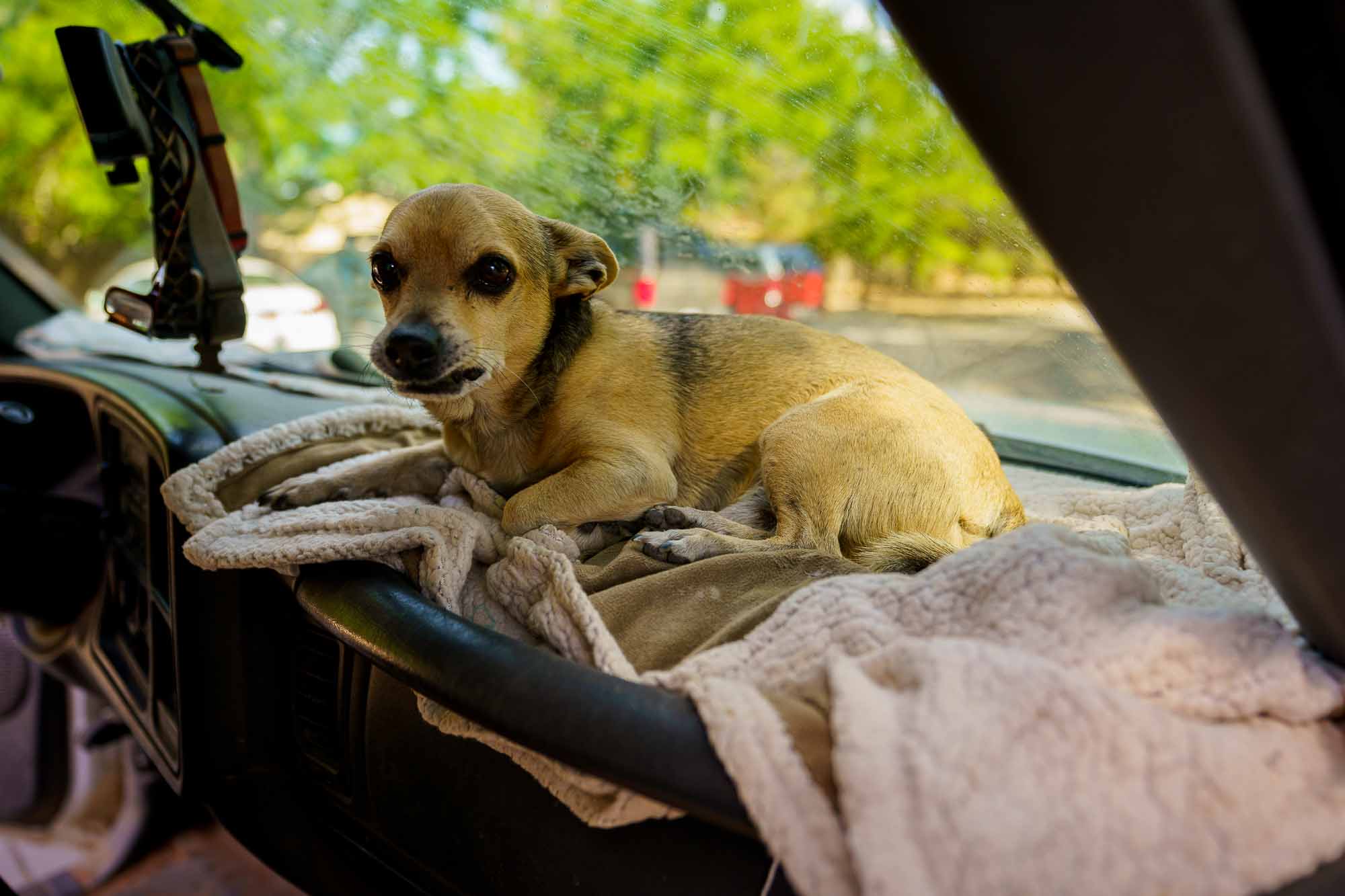 Melnicoff, with her trusty sidekick Lil Boo, has worked since 2008 through her nonprofit Moab Solutions to get people who are unsheltered into motels and hotels on cold winter nights and hot summer days. 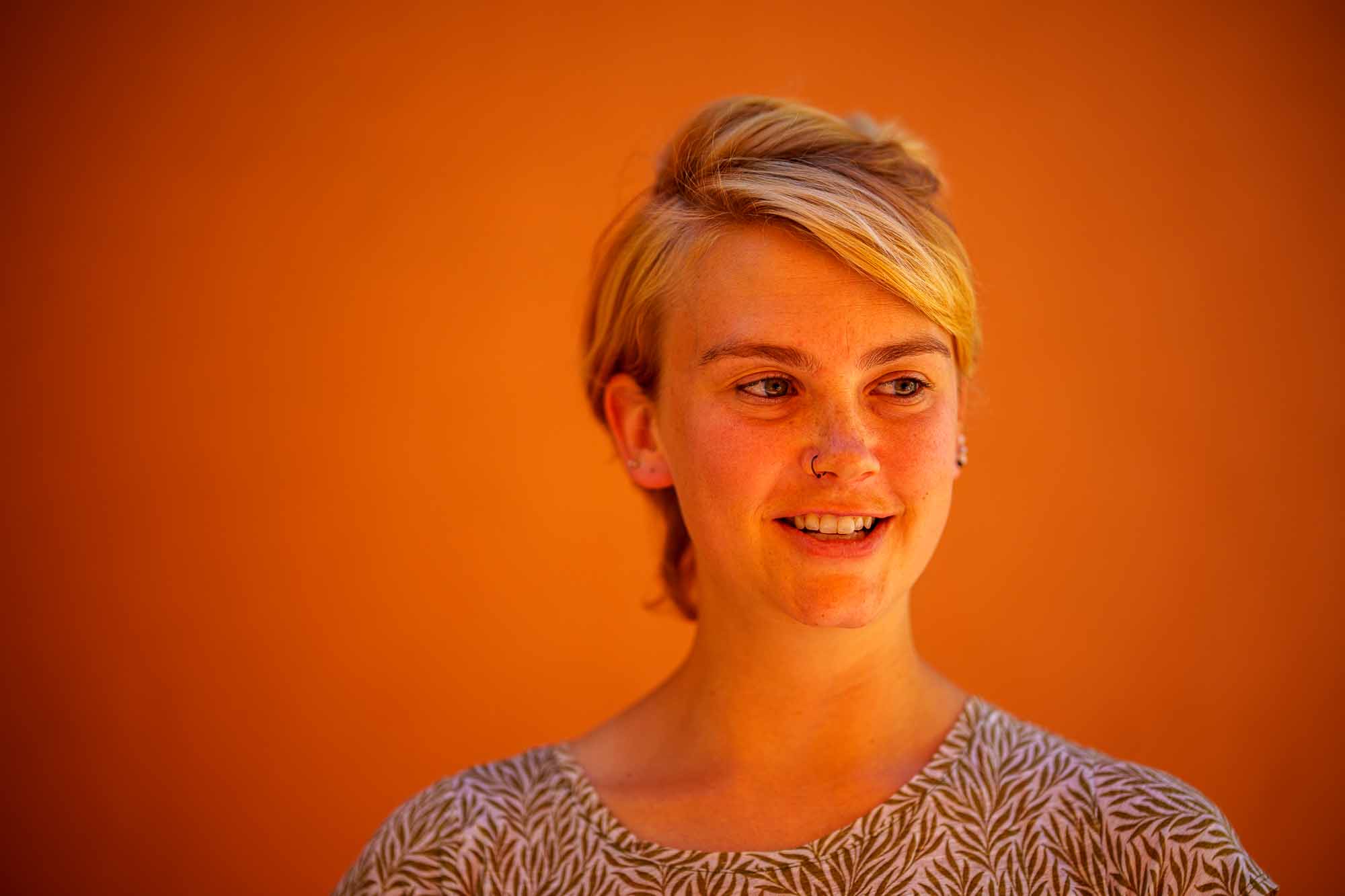 “Sara for so many years was the only person addressing homelessness in Moab,” said Liz Donkersloot, housing resource coordinator at the Moab Valley Multicultural Center. “And the police, they’ll still call her at 3 a.m. like, we found a homeless man, what do you want to do? Do you want to come get him?” 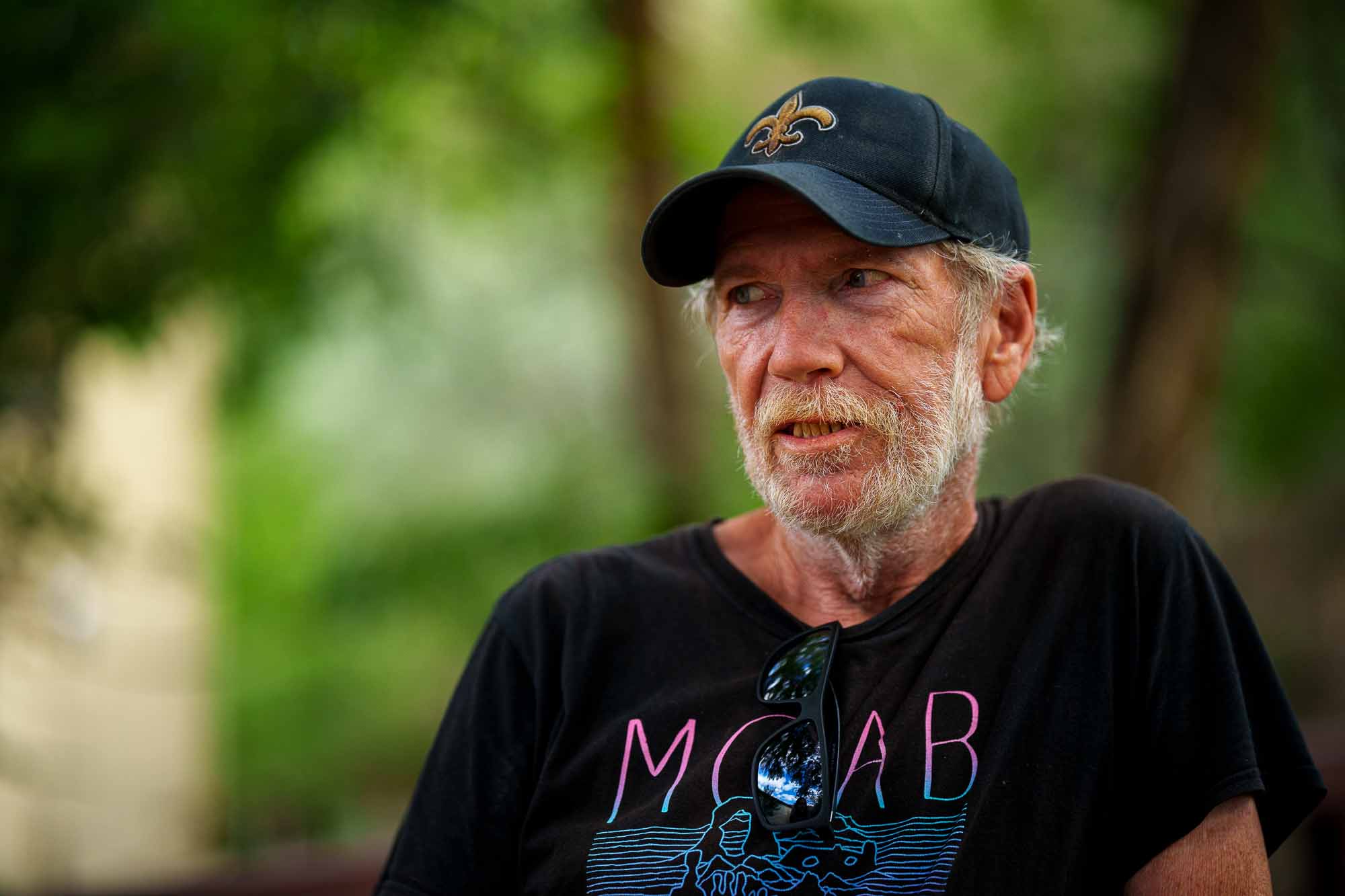 Carey Jones, who is now in housing after spending about three decades on and off the streets, credits Melnicoff with saving “a lot of lives out there.”

“She saved my life on two occasions,” he said. “Just got me into rehab. I was poisoned really bad, I was drug addicted and living on the street, almost freezing to death every night, sleeping in the Post Office, sleeping in the laundromats.”

Jim Winder, Moab’s former police chief, said he admires Melnicoff’s passion as she takes on the role of “10 different service providers.” But he also worries that unsheltered people in Moab are dangerously dependent on her.

“She keeps them just on the edge of survival, and that’s not a good situation,” he said. “If Sara goes away, you’re going to have a real problem on your hands.”

Melnicoff said she’s proud of the way the community has worked to aid the unsheltered, including providing “plenty of places people can get food.”

“Even though it’s 50/50 Republican/Democrat, redneck/hippie … people come together when there’s an issue and they help each other,” she said. 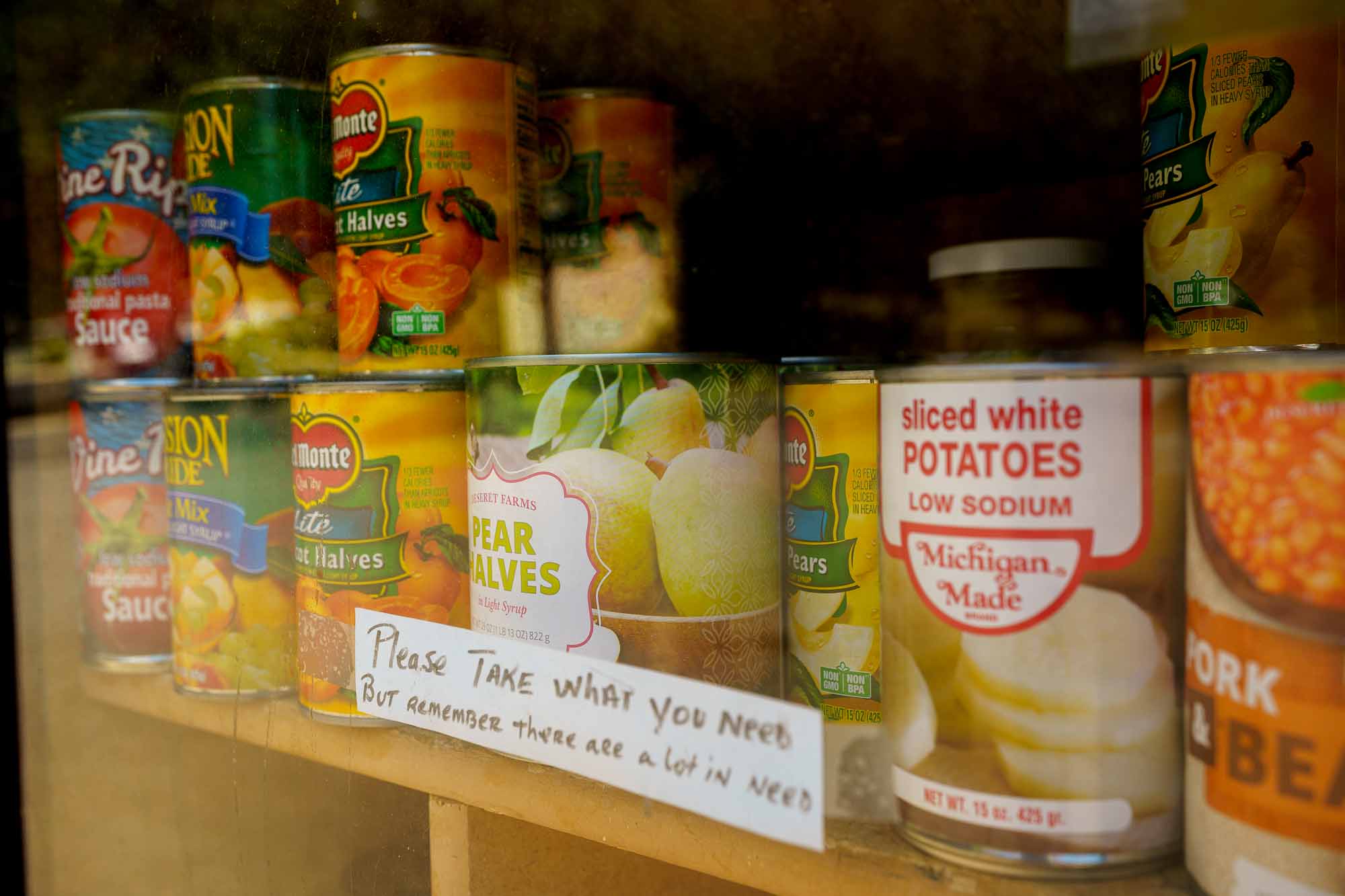 But the city’s unsheltered population is “still dealing with the elements,” she said. As booming tourism has made motels and hotels more expensive, she said, the community needs some type of shelter. 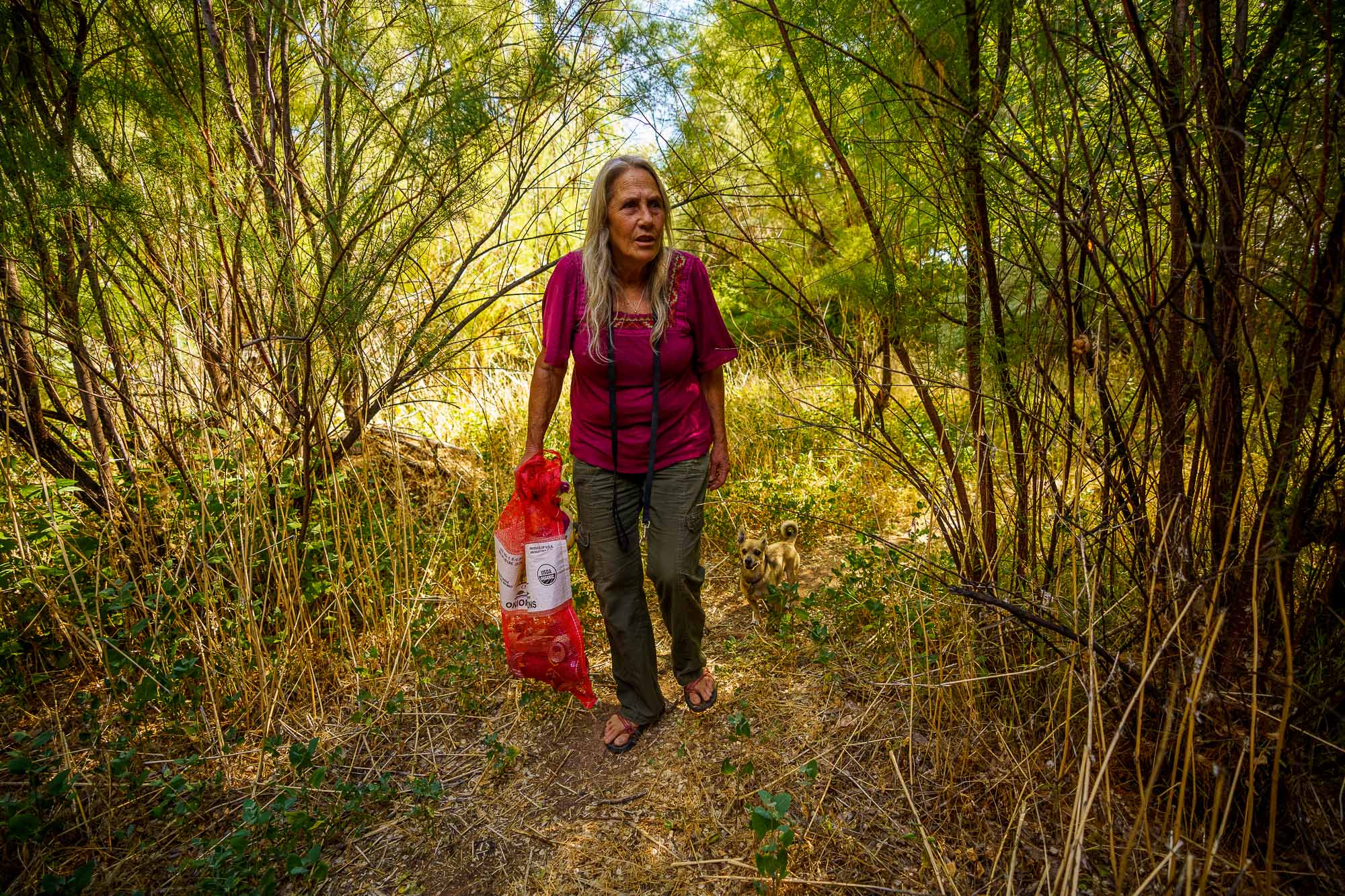 Until then, she’ll continue fielding calls from people in need, helping get people into shelter and cleaning up the camps they’ve left behind on hot summer days.

Through a grant from the Local Media Association,
The Salt Lake Tribune is reporting on homelessness outside the Salt Lake Valley.

More from this project:

Editor’s note: Anyone experiencing homelessness or who is interested in helping the unsheltered community in Grand County is encouraged to click here for a list of resources.